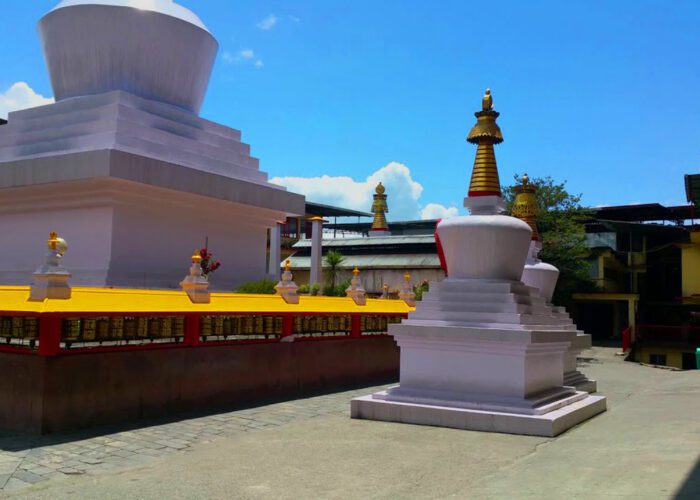 The Do-Drul Chorten or Stupa was built in 1945 by Trullshi Rimpoche, the leader of the Nyingma order of Tibetan Buddhism. It is one of Gangtok’s most majestic monasteries. A complete set of Dorjee phurba (Vajra Kilaya), ‘Zung’ (mantras), a set of Kang Gyur relics (Holy Book), and other sacred artefacts can be found inside this stupa.

The Do-Drul Chorten or Stupa was built in 1945 by Trullshi Rimpoche, the leader of the Nyingma order of Tibetan Buddhism. It is one of Gangtok’s most magnificient stupa. A complete set of Dorjee phurba (Vajra Kilaya), ‘Zung’ (mantras), a set of Kang Gyur relics (Holy Book), and other sacred artefacts can be found inside this stupa.

Around the Chorten, there are 108 Mani Lhakor (Prayer Wheels) that devoted Buddhists revolve while singing ‘Om Mane Padme Hum’ (O Jewel in the Lotus) to invoke the Bodhisattva.

The following are some key pieces of information for visitors:

In Gangtok, the Stupa is near the Tibetology Institute and Gangtok Centre.

For nirvana seekers, history fans, and photographers, Do-Drul Chorten is a must-see.

Trulshik Rinpoche, a tutor of the 14th Dalai Lama, built the Do Drul Chorten, a massive stupa near Gangtok, in 1946. The stupa’s pearly white dome and gleaming golden spire are dedicated to Vajrakilaya or Dorjee Rinpoche, an important deity in Tibetan Buddhism’s Nyigma Order.

A cluster of 108 prayer wheels with sacred mantras inscribed on them surrounds the stupa. It houses several important religious Kangyur manuscripts and relics related with Dorje Phurba. These comprise a complete set of Dorjee Rinpoche and Zurma mantra mandala sets. Jang Jhap Chorten, attributed to the Trulshik Rinpoche, is one of the lesser stupas in the complex.

The weather in Gangtok is ideal in the spring (March to May) and autumn (September to November) (September to October). Clear, sunny, and breezy days are the norm.

Despite this, mountain enthusiasts flock to Sikkim practically all year, save during the monsoon season. Though relatively chilly, the winter months of November and December bring out a new kind of beauty in the hills.

The Do Drul Chorten is located in the Deorali region of Gangtok. It is a short distance from the major town. If you don’t feel like walking, there are several cabs in town that will take you there. The stupa is within walking distance to the Namgyal Institute of Tibetology, which was founded by another respected lama, Dodhrubchen Rinpoche.

Please don’t leave your garbage there. It’s a stupa where people celebrate holiness, thus, a peaceful environment is the only ask.

Make sure you make no noise and click pictures if allowed.