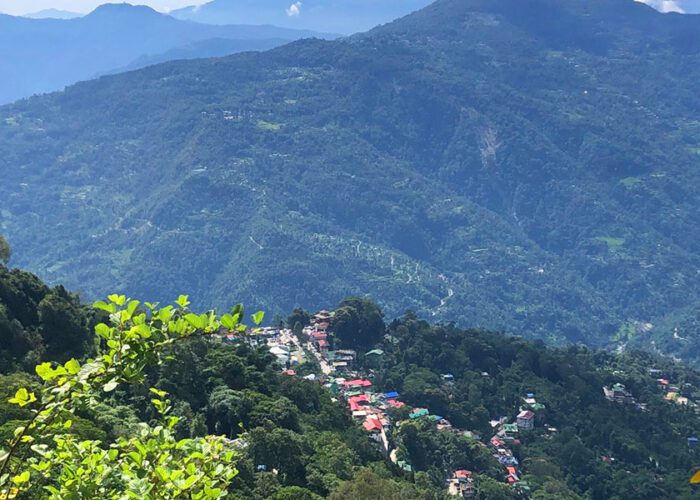 Gyalshing, or Geyzing as it is more colloquially known, is a tiny town in West Sikkim that also serves as the district headquarters. Gyalshing literally means “the King’s garden,” and it was formerly the royal garden belonging to Rabdentse’s royal castle. Gyalshing is a tiny but active town located 117 kilometers from Gangtok and 823 meters above sea level. It is well connected to all other important towns in Sikkim and West Bengal.

Predominantly inhabited by Nepalese people, the town’s predominant language is Nepali, and the town is largely a Buddhist tourism hub, yet it does not fail to thrill nature enthusiasts. Gyalshing offers stunning views of the Himalayas, particularly the Kanchenjunga summit. It is also an educational center for Sikkim and North East India in general, with excellent medical facilities.

Gyalshing is a must-see for anybody interested in learning more about Sikkim’s culture, flora, and animals, and exploring the vistas of the Himalayas.

Gyalshing has a moderate climate that is comfortable throughout the year. Summer (April-June) and autumn (September-November) are the finest times to visit (September-December).

Geyzing During the winter (October To February)

Geyzing’s weather gets quite lovely as winter approaches in October. As winter approaches its apex, the temperature in the city can sometimes fall below 0°C. It often fluctuates from -10°C to -30°C, making it exceedingly chilly at times and necessitating the use of heavy woolens. When the winter season is at its peak, which is in December, hardly many visitors visit. It is also the season to enjoy snowfall!

Geyzing During the summer (March To June)

The summer season is the best time to visit Geyzing’s locations and attractions. The temperature swings between 18°C to 25°C throughout this time of year, making it a lively hub of outdoor activities. Summer provides travelers with a plethora of sightseeing opportunities.

Geyzing During the Monsoon (July To September)

Geyzing receives mild to moderate rainfall throughout the monsoon season. The town is becoming more beautiful and greener. The temperature ranges from 10°C to 15°C. Moving from one location to another might be difficult at times owing to weather, and one cannot even enjoy sightseeing. As a result, it is best to avoid visiting Geyzing during the rainy season.

How to visit Geyzing

Gyalshing is accessible by the Bagdogra Airport and the New Jalpaiguri Railway Station, both of which offer direct road access to the town. Gyalshing is also accessible by road from other key cities and towns like as Gangtok, Pelling, and Yuksom.

Geyzing’s nearest airport is Bagdogra Airport in Siliguri, West Bengal, which is approximately 134 kilometers away. It takes around 5 hours to get there. This airport provides regular flights to and from numerous major Indian cities, including Mumbai, Delhi, and Kolkata. You may take a private cab from the airport to Geyzing. There are also shared cabs and state-run buses.

Geyzing is 122 kilometers from Gangtok, and the easiest way to get there is to fly to Gangtok and then drive down to Geyzing. Gangtok is around 125 kilometers from Bagdogra Airport in West Bengal.

Taking the Train to Geyzing

Geyzing’s nearest railway station is New Jalpaiguri Railway Station in Siliguri, West Bengal. It is approximately 127 kilometers from Geyzing. The travel from the airport to town takes around 4-5 hours. The railway station has direct connections to major Indian cities such as Kolkata, Mumbai, and Delhi. Taxis, both private and shared, are available at the airport and throughout Siliguri.

Geyzing is 122 kilometers from Gangtok, and the most easiest way to get there is to take the train to Gangtok and then drive down to Geyzing.

By Road, Get to Geyzing

All of the major cities and towns in the Sikkim area are well accessible by road to Geyzing. Geyzing is 122 kilometers from Gangtok, and the most easiest way to get there is to fly to Gangtok and then drive down to Geyzing.