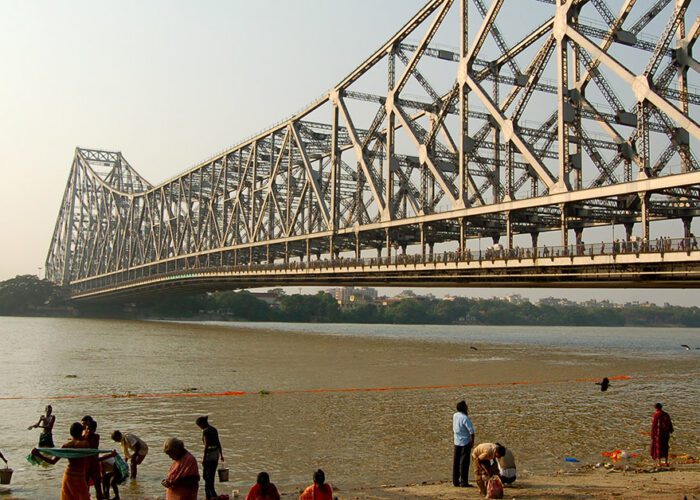 Once known as the Manchester of Bengal, this District has a number of places of tourist interest, a few of which are the most visited sites in the country and all located in and around the Howrah Municipal Corporation. Howrah, the second largest city of West Bengal and twin of Kolkata is said to have a rich history that dates back to 500 years. The name itself is possibly derived from a village named Harirah which was located in or about the site of modern-day Howrah City. Venetian explorer Ceasare Federici was the first European who mentioned a place called Bator in his journal in 1578 AD which is identifiable with the modern-day place around the Howrah City. The Bengal Council of East India Company, on the accession of the Emperor Farruksiyar to the throne of Delhi in AD 1713, sent a deputation to him praying for a settlement of the villages Salica (Salkia), Harirah (Howrah), Cassundeah (Kasundia), Ramkrishnopoor (Ramkrishnapur), and Battar (Betor) to the west of river Bhagirathi and once the settlement was made in favour of the East India Company, the places were quickly adopted as exit and entry points of sea faring business hubs and the modernisation of Howrah city as we know it now, began. The Howler Railroad Terminal was established in 1854, the first municipality to operate in 1862, but the current enterprise was born in 1980 when the Howler Act came into force.

It is located in the Damodar Temple of the Mandal family from Sakabuda in 1699, namely H. 1769 AD, the village of Zikira in the Amta II block. The upper part of the temple is adorned with terracotta works depicting Sir Krishna’s notable events and other wonderful terracotta designs and motifs.  The ornate archway panels of the Temple are adorned with Rama scenes fighting the magnificent Ramayana Ravana. It is Atchara Temple. Salagram Shira (an almost round black stone idol representing Lord Narayana) is worshiped at the temple. The south-facing Barochala Temple (12 roofs) has adjacent Atcharadormancha, Nahabatkana, and octagonal Rasmancha. This type of temple is very rare in the architecture of the Bengali Temple. The Dolmancha, adjacent to the Temple, is dedicated to Damodarge (Saargramsila), where daily worship is held. The terracotta panels show not only images from social life, but also images from Ramayana through its rich terracotta artwork. An image of Gostholila is displayed on the terracotta panel. In the nearby village of Amta II block in the Howrah district, Lautara, there are several terracotta temples and other buildings, of which the Damodar temple in Circarpara deserves special mention. This Barochala may have a Lhasa shelf.

Garchumuk, located in the Howrah district of West Bengal, at the confluence of the Hooghly aand Damodarrivers, further enhances the beautiful landscape of the place. With spectacular views of Ganges, which is becoming an increasingly popular tourist destination, it’s perfect for  weekend tours. The zoo covers an area of ​​about 13.40 hectares and is mainly under the Howrazilla Paris Shadowverse. The Wildlife Park was established in 1991 for the beauty of the landscape and its suitability for wildlife. This is the main attraction for tourists and locals. This park helps spread visitors’ awareness of our wildlife conservation and education. The park is managed by the Director of Forestry, Howra Forestry Department.

Currently, the zoo is home to mammals, birds and reptiles, including crocodiles. The zoo is well connected by road and rail.

By Road:  60 km fromHowler District Headquarters and 15 km from Uluberia Train Station. It takes 2.5 hours by bus from Esplanade to Gadiala.

By train: From Ulveri Alily. The train station to the zoo is almost an hour away via the local road.

The Las Bali Garden House in Howrah’s Belur is well known not only as a historic homestay, but also as a fascinating group of temples by the fascinating Hooghly River. An indispensable place for weekend trips, it is also known as a picnic spot. This fascinating temple complex covers several areas of Biga and is adjacent to Beruru Mars and Baranagar on the opposite bank of the Hooghly River. The Temple Complex focuses on the Radaraman Jewish Temple, built by the Jora Sankodo family Purna Chandrado in the late 19th century. Las Bali was once the core off the Doh family’s various religious activities, especially the Las Festival community, which was a major attraction at the time. This is the nine highest temples, but in the courtyard of this temple there is one Rasmancha Temple and six Atchara-type Shiva Temples, with a welcome gate. This temple also consists of several guest houses and servant housing. After

refurbishment, this 100-year-old Doras Bali in the Las Bali Garden House is visited as an additional facility to experience ancient heritage, picnics and day trips with the beauty of the Fugli River and the rich architectural heritage of the temple. We provide homestays to people.

Ananda Niketan Kritisala is located in the Tepur-Nabasan village of the Bagnan I block. It is cited as one of the best local museums in West Bengal run by a private organization. It is run by the Anandani Ketan Society. The Museum has a gallery of art, archeology, history, folk art and crafts from southern West Bengal. Museum exhibits include terracotta ornaments, free-standing terracotta figurines, toys, dolls, and cult objects from the late antiquity to the modern era. Visitors are also fascinated by the museum, which exhibits specimens such as coins, stone carvings, votive terracotta seals, metal carvings, jadupots and timelessly designed folk items. Bengal’s Nakshi Kanta (handmade blanket) is another attraction for museum visitors.

The Kalyaneshwar Temple is a more than 500-year-old Shiva Temple in Bally, Howrah near Belur math. It is very famous and is visited by millions of monks and followers all over India every year. Surrounded by temples of Kali, Ganesha, Vishnu and Bajuran Bali. The building is about 400 years old and is said to have started by Pandava and continued by the Katok dynasty. According to legend, Ramakrishna Dev frequently visited the temple with the followers of the priesthood of Lord Shiva and the founding members of the Ramakrishna Mission, such as Swami Vivekananda and Swami Brahmananda. When Ram Krishnadev visited the temple with his disciples, he “feels ecstatic.” Paramahansadev once told Hriday that “Shiva Linga was a living god and actually moved.” Famous festivals in this temple are Mahashivaratri and Charaksankranthi. This ritual is still performed by the monks of the Ramakrishna Mission. The Hooghly River runs near the temple.

The Vivekananda Setu (also known as Willingdon Bridge and Barry Bridge) is a bridge over the Hooghly River in West Bengal, India. It connects the town of Howrah near Barry with the sister city of Kolkata near Dakshineswar. Bibikananda Setu allows transportation of traffic upstream (from Bali to Kolkata). This is a multi-span steel bridge, completed and built in December 1932 (starting in 1926), providing a road and rail link between the Port of Calcutta and its hinterland. At that time, the cost of the bridge was almost over 100 million rupees. It is 2,887 feet (880 m) long. The bridge is about 0.5 miles long and has 10km access roads on either side. According to the identification plate of each bridge girder, the construction of the bridge was carried out by the renowned Kutchi-Mestri contractor and businessman Rai Bahadur Jagmal Raja Chauhan. However, the construction of the bridge was done at the Braithwaite & Company factory in Calcutta. The Barry Bridge was named after the Governor-General of India, Freeman Freeman-Thomas, and the First Marquis of Willingdon. The first train to cross the bridge was named the Jagmal Raja Howler Express by the British in recognition of the achievements of Lai Bahadur Jagmal Raja. In the Indian Railway History Archive, this railway bridge stands out when the railway first crosses the Hooghly River and reaches Calcutta at the Sealdah Terminal. The famous Dakshineswar Temple is located on the banks of the Hooghly River near the Barry Bridge.

Phuleswar is a small town in the Howrah district. The Hooghly River is large and exclusive here and offers stunning views. You can see seagulls and kingfishers jumping into the water to catch fish, and local fishermen are spreading nets for the day’s catch. The riverbanks are covered with thick grass and dotted with lush trees, making Phuleswar an ideal place to rejuvenate your senses in nature. The shade makes the riverbank an ideal place for a picnic. Apart from the hustle and bustle of the city, the wind blows fresh and clean. This is unusual for today’s urban dwellers. Watching the sunset over the horizon is a unique experience at the Houri Watefront.