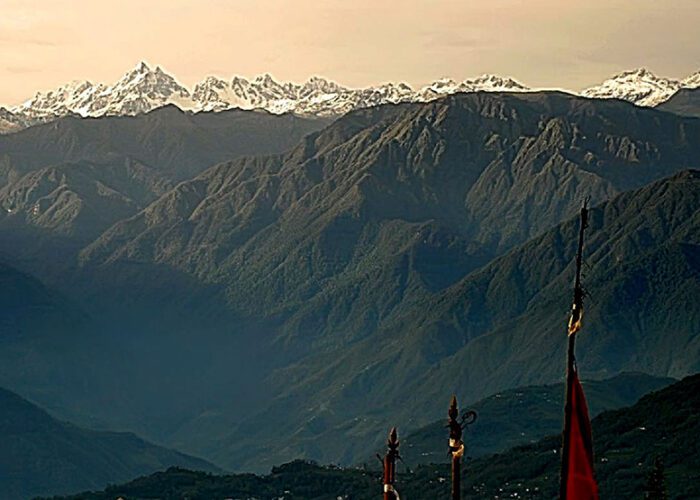 In the Kalimpong district’s Lava – Lolegaon Circuit, there is a tourist settlement called Rishop. Before travellers found this hidden gem of the Eastern Himalaya, this was an inaccessible community with few homes and step farming dependent on monsoon rain. The tranquil setting and magnificent vistas of the snow-capped Himalayan mountain range from Rishop are its key draws. Lava, Lolegaon, Pedong, Rishi, and Aritar are nearby places that may all be visited as part of a day sightseeing excursion. In the early days, getting here required a 5-kilometre hike from Lava. Today, a motorable road connects Lava to Rishop (9 km away). The hamlet is dotted with little resorts.

By Air: Bagdogra Airport is the closest airport to Rishop. To get to these locations, a variety of transportation options are available.

By Train: Siliguri and New Jalpaiguri are the closest train stations to Rishop. These locations have a variety of travel options for getting there.

By Route: From Siliguri, there is a passable motorable road (Hill Cart Road) that leads to Rishop through Kurseong. There are several transportation options between Siliguri and New Jalpaiguri to Rishop.

The magnificent view of the Kanchenjunga, the third-highest mountain in the world, and numerous frozen pinnacles is Rishop’s major draw. It is impossible to describe the psychedelic colour play on the giants’ icy surfaces.

The Neora Valley National Park’s Tiffin Dara is a well-known and popular viewpoint recognised for its beautiful dawn views, as well as expansive panoramas of the dense, peaceful pine trees and glimpses of the towering Himalayas. The snow-capped Khang-Chen-D-spectacular Zongha’s vista of the night sky is a unique gift that draws visitors to Tiffin Dara. From here, you may see some of Nathu La and Jalep La.

Since Tiffin Dara is only 3 kilometres uphill from Rishyap through a deep forest full of birch, pine, and fir trees as well as several orchid species, getting there is not difficult, especially for adventure seekers. You may travel to Rishop by railway, rail, and plane. The distance between New Jalpiguri, the closest railway station, and Rishyap is 116 kilometres. Rishyap may be reached by rental vehicles, hikers, and jeeps from Bagdogra, which is the closest airport. Despite just being 126 kilometres away, it takes over 4.5 hours to get there. It takes an hour to go from Kalimpong to Rishop and 30 minutes from Lava.

Activities & Attractions in Lolegaon (Near Kalimpong)

A day trip from here may be taken to Lolegaon, a charming hamlet located around 34 kilometres from Rishop. A trip through the historic forest’s Canopy walk or a stay at the woodland guest home are also options. Jhandidara is another dawn location near Lolegaon.

Welcome to Pedong, the newest location in the ethereal and evergreen North Eastern highlands. This location offers a stunning fusion of history, culture, and environment where visitors may have an authentic experience. Pedong is situated in the well-known Darjeeling area, 21 kilometres from the town of Kalimpong. At a height of 5000 feet, the altitudinal variance varies from subtropical to alpine, with the Rishi Valley being the lowest. With the ever-present Kanchenjunga in the background, the terrain is easily negotiated and offers some of the most breathtaking views in the surroundings.

By Road: The quickest journey from Rishyap to Pedong will take around 1 hour (22.5 km) through Alipurduar Road, Lava Road, and Rishi Road.

A hill hamlet called Pedong is located 75 kilometres from Darjeeling and 85 miles from Siliguri and Gangtok. Lava is approximately 25 km away, while Lolegaon is only 38 km away. It is situated in the district of Kalimpong. The distance from Pedong to the intersection of Bhutan, Sikkim, and West Bengal in Kalimpong is only about 23 kilometres. It rises 5100 feet above sea level.

This is a relatively new location—the hill station directly across the hill from Rishop. Although the trip from Rishop to Kolakham through road passes through Lava, the overall distance is only around 21 km, far less than the seeming distance of 3 km. The famed Changey falls are around 5 km away from Kolakham and the community is close to Neora Valley National Park.

The verdant valley and the undulating hills may be seen for miles north of Kolakham. They come to an end near the base of the Kanchenjunga in the west. The snow-capped summits of Kabru, Kabrudome, Kanchenjunga, and Pandim stand out against the expansive sky under clear conditions. The jungle route may be used by enthusiasts to go for a walk. There is a good likelihood that you may encounter wildlife here. It takes 5 kilometres to reach the stunning Changey Falls.

Take a train headed for New Jalpaiguri, get out at the NJP junction, and then rent a car to drive the 123 km (or 5 hours) to Kolakham. The automobile can alternatively drive the Gorubathan road, which is 117 kilometres shorter than the Siliguri route. The closest airport to pick up a rental automobile is Bagdogra.

Lava, a popular tourist site, is about 9 miles distant. There is a hike path with a mere 5 kilometres in mileage. The Lava Jamgyong Kongtrul Monastery is open for visitors. This charming location is located at a height of 2,350 metres.