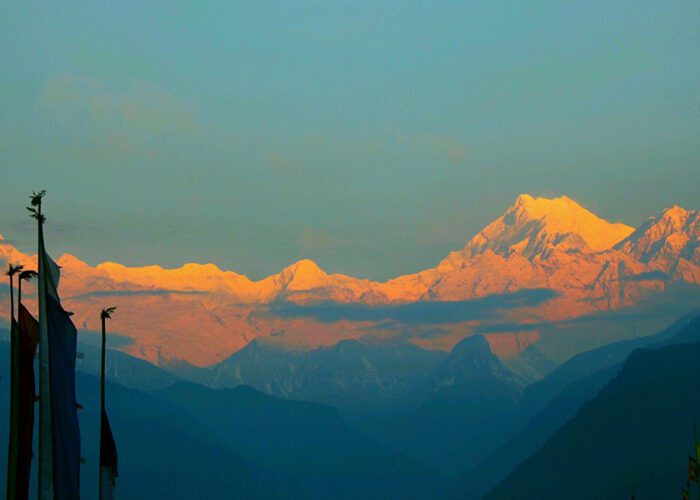 Singhik a quaint little town in the Mangan subdivision of North Sikkim district in the north eastern Indian state of Sikkim. It is around 56 kilometres from Gangtok. This town is located at a distance of four kilometres from Mangan, which is also the district headquarters. The town has clear views of Kanchenjunga and Siniolchu. The popular Singhik View Point attracts a lot of tourists offers the most gorgeous view of Mt. Khangchendzonga and Mt. Siniolchu. Singhik is surrounded by lush green hills and the gushing Teesta River flowing below it adds charm to the entire area. Singhik is a great place to catch up with nature and take a short break before proceeding for other major destinations of North Sikkim. You can also spend some time here or even spend overnight in the tourist lodge that is available close by with arrangements for night stay. Singhik forms an attractive destination for nature lovers on account of a number of interesting short nature trails involving around 1 to 3 days as you go exploring the higher ridges of the surrounding hills.

One has to spend a few days in the serenity of Singhik and that can yield a lot of treasures and valuable memories to carry forth. Two very prominent tourist places are the Singhik Monastery and the traditional Lepcha house that everybody loves to visit while in Singhik. Phodong Monastery, which is one of the oldest monasteries in Sikkim is approximately 30 kilometres from Singhik. In fact one can pay a visit to the gorgeous Seven Sister Waterfalls and Naga Waterfalls that are within a distance of an hour’s drive. The historic village of Kabi, which is traditionally significant and is of great interest for being the land where the Lepchas signed the Treaty of Blood Brotherhood in the 14th century is just 40 kilometres away. These tourist places can be covered comfortably in a day trip from Singhik.

Two other charming and beautiful villages, Dzongu and Tingchim, are well within a range of 15 kilometres of Singhik and are attractive destinations for day trip or sightseeing from the base at Singhik. Tinchim is famed for its entrancing, emerald, sacred lake nestled within the dark deep forests surrounding it and the century old monastery. And Dzongu is a traditional village inhabited by the Lepchas. In your sojourn of this mountain village, watch the fascinating village life from close quarters, enjoy short treks across the fascinating mountain trails and go for a bird watching spree in the surrounding areas of Singhik.

For the ardent adventurists at heart, Singhik forms one of the classic spots to start off for short day-treks to places such as the Jhandi view point from where you can enjoy a panoramic dazzling view of the entire Eastern Himalayan ranges, glittering and shining in the sun rays reflected on the snow-capped peaks. An animated and interesting trek across the very remote terrains of Sikkim is the Tosha Lake trek and Singhik forms one of the last destinations from where you can start for this unique trek across a pristine route across the wilderness. Local guides help in exploring and unfolding the mysteries of this beautiful region. Local cars and shared taxis are available from Mangan to Singhik. Even from Gangtok regular car services are available.