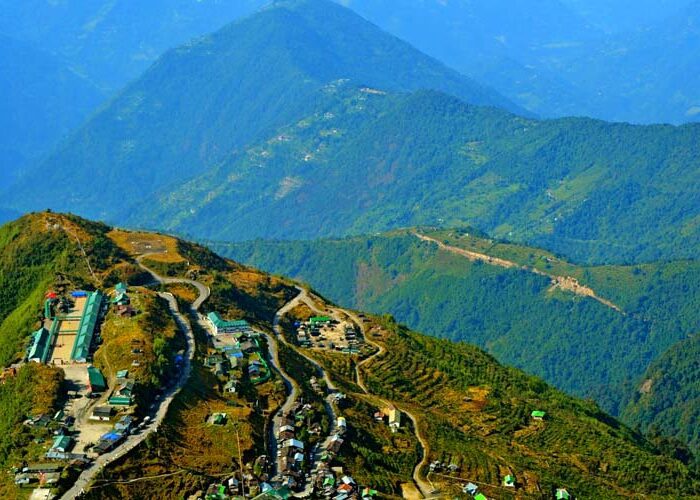 Zuluk or Dzuluk is a small village in the rugged terrain of the lower Himalayas in East Sikkim, located at a height of roughly 10,100 feet. It was originally a stop on the famous Silk Route from Tibet to India. It is one of East Sikkim’s off-the-beaten-path places. This little village has a population of roughly 700 people. There is also an Indian Army facility at Zuluk, which has been used as a transit camp for armed force development to the Chinese border, which is a few kilometers away.

Dzuluk is bordered by untamed woodland, part of which is entirely virgin. Sightings of deer, wild dogs, Himalayan bears, and red pandas are not rare. Tigers have also been spotted in the vicinity, according to reports.

A variety of birds, including Blood Pheasant, Himalayan Monal, Kalij Pheasant, Snow Pheasant, and others, may also be spotted. Thousands of flowering rhododendrons blanket the region and its neighboring hills during the summer months. Dzuluk is a riot of color throughout these months because of the diversity of rhododendron that can be seen here.

Zuluk is awash in various colors of wild blooms between August and September. The entire landscape is covered in various wildflowers. Zuluk is blanketed in snow from January through April. While the windy months of May through July are often hazy.

Your vehicle will begin climbing steep mountains as soon as you arrive in Zuluk. The well-known Zig Zag Street makes a few hundred bends and curves to traverse the 14 km distance to Thambi View Point. At an elevation of 11,200 feet, it provides a spectacular sunrise perspective. From here, one can see the whole eastern Himalaya, including Kanchenjunga. You’ll be surrounded by dense virgin forests that haven’t been explored or tainted by the colors of modernity. You may also spend time here viewing large brilliant feathered species such as Satyr Tragopan and Himalayan Monal. You may also walk around and try to discover the first silk course. The stone-cleared roadway is still spotless in several places.

How to reach Zuluk

Zuluk is around 4 hours away from Gangtok (90 km). You may go from Gangtok to Zuluk through Tsomgo Lake and Baba Mandir, however, a permit for this route is relatively difficult to get. The most common route is via Pakyong and Lingtham.

If you are traveling from another location, such as Darjeeling, Pelling, NJP, or Bagdogra, you must first visit Rongpo, Sikkim’s entrance point. A less-traveled route will take you to Dzuluk through Rorathang.

At Tukla, the street splits. The street on the left leads to Nathang Valley, while the route on the right leads to Old Baba Mandir. The two streets will re-join after roughly 7 to 8 kilometers.

Nathang Valley may be reached by using the left street. The location has become one of the most famous tourist destinations in Sikkim. Homestay choices are more limited in this town than in Zuluk. Because the location is at a high elevation, a night’s stay here without acclimatization may result in height illness.