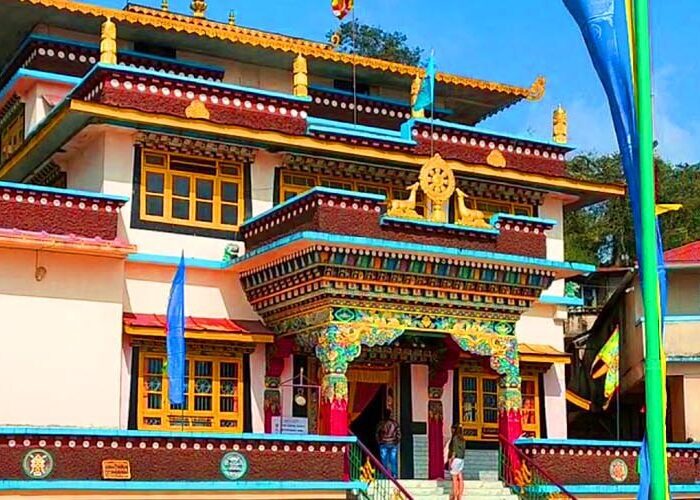 Gonjang Monastery is located at Fatak Bojhogari near Tashi Viewpoint in Gangtok, Sikkim, around 8 kilometres from Gangtok SNT Bus Station. It is one of Gangtok’s most famous monasteries and one of the top Gangtok attractions, with an elevation of 6066 feet.

H.E. Tingkye Gonjang Rimpoche founded Gonjang Monastery in 1981. Yolmo Terton Ngakchang Shakya Zangpo, a 15th century Nyingmapa Terton, was acknowledged as his manifestation. The monastery adheres to the Nyingmapa school of Tibetan Buddhism’s Jangter tradition. The monk pupils are taught monastic education as well as Tibetan language and English. The monastery disseminates knowledge about Indian and Tibetan Buddhist philosophy based on moral principles through close and comparative study.

Gonjang Monastery is located in Gangtok, Sikkim, in Fatak Bojhogari near Tashi Viewpoint, about 8 kilometres from Gangtok SNT Bus Station. With an elevation of 6066 feet, it is one of Gangtok’s most famous monasteries and one of the top Gangtok attractions.

Gonjang Monastery was created in 1981 by H.E. Tingkye Gonjang Rimpoche. Yolmo Terton Ngakchang Shakya Zangpo, a Nyingmapa Terton from the 15th century, was recognised as his manifestation. The monastery follows the Tibetan Buddhist Jangter tradition of the Nyingmapa school. Monastic education, as well as Tibetan and English, are taught to the monk students. Through close and comparative study, the monastery disseminates knowledge about Indian and Tibetan Buddhist philosophy founded on moral ideals.

The Gonjang Monastery will be the perfect finale to a rewarding day for those who have climbed the slopes, visited the points, and basked in the natural splendour of Sikkim. The Dalai Lama blessed the monastery, and its proximity to Gangtok makes it a popular destination for visitors looking to visit a monastery close to town.

Gonjang Gompa, established in 1981 at an altitude of 6066ft, is home to some of the most remarkable religious artefacts you’ll discover in a Nyingma Order of Buddhism monastery.

The panoramic valley and mountains in the background can be seen from this monastery because it is situated at a high altitude. On a clear day in the summer, a visit to Gonjang will be truly unforgettable.

It is best to visit Gonjang Monastery after 9 a.m. and before it gets dark.

The shortest distance between Gangtok’s downtown and Gonjang Monastery is less than 8 kilometres. From the local taxi station, take a shared or private vehicle to Sichey and exit onto Lower Burtuk Road, then onto NH10 towards the monastery.

Because Gonjang and Tashi View Point are only 600 metres apart, stopping on the way back from Tashi is an excellent idea.

While you are permitted to take photographs of the monastery’s façade, you are not permitted to do so in the inner sanctum. Respect the sanctity of the gompa by following this guideline.

While touring the monastery’s inside, be careful not to touch the idols or other holy artefacts.

Gonjang Gompa is religiously significant, and if you’re interested in Sikkim’s Buddhist history, you should visit this monastery.