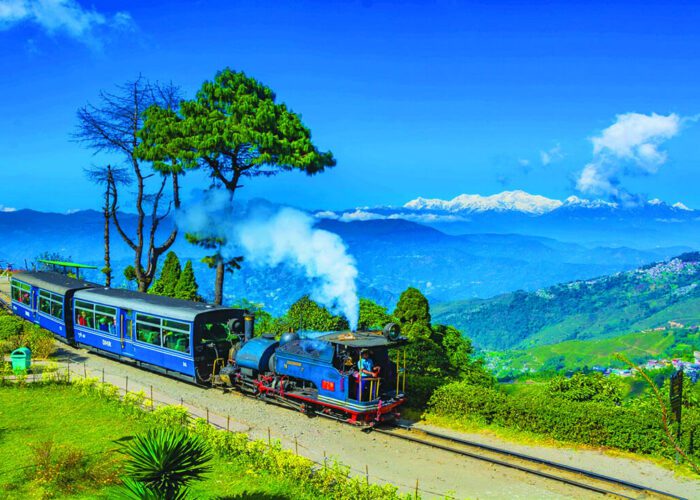 The wonderful things, such as bent trees, happy earthworms, reluctant tea-coloured puddles, flowering Rhododendron and Magnolia plants, wild garden flowers blooming in different colours of the rainbow, and a British bungalow growing a fragile façade of greenery for ages amidst a sprawling tea garden, breathe unsaid within the fragrance of tea leaves that rises off the hills and hovers over Darjeeling on a summer day like a hat. A traveller will be charmed and in awe by the splendour of Darjeeling’s tourist attractions.

And when the skies open up to pelt the land with rain, the grass appears wet-green and content, the loose earth ripples away from the boundaries, the washed-off dust-green trees beam once more, and the lush countryside sparkles in the glimmers of sunlight. Darjeeling, the former summer capital of India under the British Raj, is covered in dense sal and oak forests, with ducks and teals making waves in the water and rare breeds of orchids spreading colours on moist soil. It also has stunning colonial architecture, including mansions and churches, an influence from various cultures in the majestic craft and cuisine, and a stunning woman who was the taker of the seed.

This “Mecca of Tea,” which has over 80 active tea gardens scattered over acres of land, composes a fanciful poem about the “Champagne of tea” while riding on an antique toy train from the 1880s on a foggy day. The northwest winds come to Darjeeling to rip it to shreds, but the new, lovely things come in the first taste of spring on the northwest wind, and the old leaves disappear, not one lasts, but the beauty stays with the new and lasts for all time. The tourist attractions in Darjeeling will constantly make sure that you can’t help but fall in love with this city’s splendour.

A location of spectacular beauty topped by the mighty Himalayas, Darjeeling evokes images of snow-capped mountains, tranquilly of brilliant green hills steeped in splendour, and awe-inspiring magnificence. One of the world’s most stunning hill resorts in Darjeeling. This lovely refuge is surrounded by a rainbow of colours. The flamboyant crimson rhododendrons, glittering white magnolias, kilometres of undulating hillsides covered in emerald green tea plants, and the exotic silver fir woods – all under the shelter of a stunning azure sky dotted with cloud particles – compellingly portray Darjeeling as the QUEEN OF HILL STATIONS. The title is aptly supported by the Kanchenjunga’s crest, which shines in the early morning light.

Thousands of people are drawn to Darjeeling today seeking a peaceful escape from the maddening crush. Travellers of all types—tourists, hikers, ornithologists, photographers, botanists, and artists—will discover in Darjeeling an experience that will live long in their memories.

This location, 13 kilometres from the town and at an elevation of 2590 metres, is renowned worldwide for its breathtaking dawn views of “Kanchenjunga” and the vast Eastern Himalayan Mountains. The tallest mountain in the world, Mount Everest, may even be seen from here.

It is conveniently reachable by road from Darjeeling and is located 11 kilometres from the town of Tiger Hills in Darjeeling. After leaving the Ghoom station, it may be accessed by vehicle or on foot by travelling via Chowrasta, Alubari, or Jorebangla before soaring to the peak. You must turn right into the winding, hilly Senchal road. The drive to the top by automobile from Darjeeling town is roughly 40 minutes.

Taxis from the Chowk Bazaar neighbourhood and hired cars or shared jeeps from the club side taxi stop at the base of Nehru Road beneath the Mall are additional options.

A fantastic technical accomplishment, the Batasia Loop Railway Loop is located 5 kilometres from Darjeeling. Watching the toy train go around the circle is intriguing. Here, you can see Tahe Town and the magnificent Snowy Peak. The War Memorial was built in honour of the valiant Darjeeling sons who lost their lives in various battles.

By Road: Darjeeling Town, which is situated below Ghoom station, is 5 kilometres away.

It is sometimes referred to as a toy train. It is one of India’s greatest and most popular hill railways. The railway travels on a 600-millimetre-wide track that was constructed in 1881. In India, narrow-gauge railways are employed to go to hill stations. The DHR has been designated as a World Heritage Site by UNESCO. It takes the toy train around 8 hours to get there. This train trip was listed as one of the most stunning in the world in the Guiness Railway Book. When travelling by rail from Siliguri to Darjeeling, passengers may observe the technical prowess of the route as well as valleys, verdant woods, tea gardens, and other sights. This highland town is pervaded by the gigantic Kanchenjunga Peak’s omnipresence.

On the Jalapahar Hill’s slopes sits the Japanese Peace Pagoda, which may be accessed on foot or by cab. Nipponzan Myohoji, a Japanese Buddhist order, built the Shanti Stupa. It also displays the Buddha’s four incarnations. The stupa was built between 1972 and 1992. A pillar and a Buddhist temple are present. The lovely stupa is after the temple (Pagoda). Because of its elevation, the stupa offers stunning views of its environs, including Mount Kanchanjunga. One of the top destinations in Darjeeling is this.

Nipponzan Myohoji, a Japanese Buddhist order, built the Shanti Stupa. The pagoda is located on Jalapahar Hill’s slopes and is accessible by foot or via cab. The pagoda is the town’s tallest freestanding building. It also displays the Buddha’s four incarnations.

Ghoom is located at an elevation of around 7,407 feet and is about 7 kilometres from Darjeeling town (or 2,226 meters). There are trains running to Darjeeling from the country’s major cities. buses and jeeps that run from Siliguri to Darjeeling are both public and private.

Take the toy train from Siliguri to either the Ghoom or Darjeeling railway stations, and then take a vehicle from there. The drive to the monastery by automobile from Darjeeling’s town centre takes around 30 minutes. You will need to turn right onto a tiny road just before the Ghoom railway station on the Hill Cart Route (the major road that leads all the way to Siliguri).

The centre of Darjeeling town is the Chowrasta or the Mall. This pleasant flat area located on top of Nehru Road, where visitors and residents go to relax in the sun, sit on one of the numerous benches along the perimeter, enjoy the stunning views of the surrounding mountain peaks and valleys, and ride ponies around the mall.

By Road: There are several routes in Darjeeling that go to the Chowrasta or the Mall. The most well-known is Nehru Road, which begins at Gandhi Road and is where Keventer’s restaurant is situated.