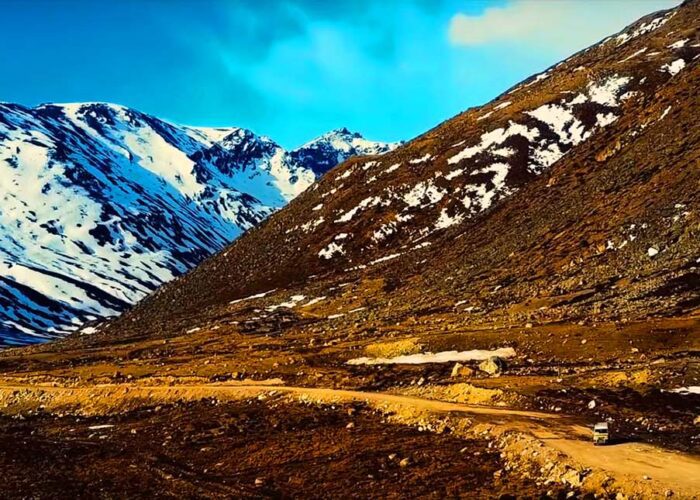 Lachen is majestic and simply alluring hill town situated in the mesmerizing North Sikkim at an altitude of 9600 feet. Lachen is about 129 kilometres from Gangtok and takes almost 6 hours to reach by road. The roads are bumpy and needs constant maintenance. Lachen is alluring in its simplicity. Lachen is gradually developing into a prominent tourist destination. It has a simplicity and fresh appeal that charms the tourists. The village is small and quaint having around 200 houses. This valley has habitat where owners spend only winters and during summers they roam on the alpine pastures bordering Tibet where they tend their yaks. Lachen is a spectacular starting point for some of the most interesting treks in North Sikkim. Among these popular trekking trails there is the trek to the holy Guru Dongmar and Tso Lhamu lakes.

The magnificent Gurudongmar Lake is around 67 kilometres and it takes 4 hours to reach the lake from Lachen. The day trip from Lachen to the lake starts very early in the morning at around 3.30 am as the weather at Guru Dongmar lake deteriorates as day progresses and visibility and view decreases. The lake is at a stupendous height of 17,800 feet and is spread over an area of 290 acres. This lake is the largest lake in Sikkim. It was named after Guru Padmashambhava who had visited this lake on his way back from Tibet. The surreal beauty of Guru Dongmar Lake is beyond description. The gently rippling waters of the lake reflect the ice-capped peaks of the surrounding mountains. Watch the melting haze of the bulbous clouds meeting the glistening mountain tops with icy caps in delight. The Guru Dongmar Lake will offer some exceptional views and enchanting moments of peace and beauty that will remain etched in your minds for your lifetime.

The other lake of North Sikkim in and around Lachen is the exotic Tso Lhamo lake which is one of the highest lakes in the world. It is located at an altitude of 5,098 metres or an astounding 16,726 feet. It is situated just 4 kilometres southwest from the international border shared by India with China. The magnificent lake is also commonly known as Cholamo and remains completely frozen in winters. It is fed by waters from Zemu glacier, Kangtse glacier or Pauhunri glacier, and is the gorgeous source of the beautiful Teesta river that crosses Sikkim and fills it with its unavoidable charm and enigma.

Visit the serene Lachen Gompa that attracts a lot of tourists and also visit the rustic simplicity of the village life of the ‘Lachenpas’. It is situated at a distance of 4 kilometres from Lachen Market. It is an old Buddhist monastery. Lachen Gompa is also known as Ngodub Choling Monastery. This monastery is one of the most popular monasteries in Sikkim and is a veritably top popular tourist spot among the places to visit in Lachen. Lachen Monastery was originally built in 1858 AD by Lama Karchen Dorje Drak. It was a small hut with just eight monks. Lama Karchen Dorje Drak was famous for being a distinguished student of Jamyang Choki Rinzing, who was in turn a disciple of Terdag Lingpa of Tibet. Lama Karchen Dorje Drak stayed in this Gompa for three years and was instrumental in the creation of a clay statue of Chenrezig with 1000 hands for the Gompa. After this he had gone back to Tibet. The Gompa was completely reconstructed in the year 1977 with funds from the State Government. Today, Lachen Gompa is one of the major recognized monasteries of northern Sikkim. The order of the Nyingmapa sect of Mahayana Buddhism is followed here. The monastery commands spell-binding views and was developed in the Tibetan style of architecture. This monastery houses the statue of Guru Padmasambhava or Guru Rinpoche and the premises of the monastery is decorated with colourful prayer flags and prayer wheels. The monastery is the home to some important religious ceremonies that are accompanied by annual mask dance, which is a cultural extravaganza and is very alluring for tourists visiting from far and near to witness the Sikkim religious festivities first hand.

Lachen has some restrictions of access for foreigners. But special passes can be availed if tried in advance. Lachen presents a few lodges for stay. There are stay options by the Forest Department and PWD Bungalow too. There are a number of hotels set in picturesque locations in and around Lachen.