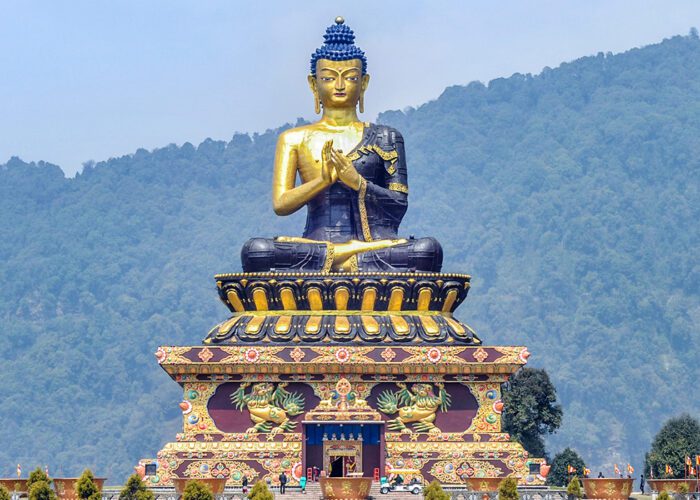 The hill is said to be a dormant volcano, and the local monks devote their respect and devotion to it since they think that only prayers can prevent it from exploding. History aficionados can marvel at the extensive collection of historical images of Sikkim, including fading portraits of Mahatma Gandhi, that can be discovered in the statue’s repository. The monument, which was built over the course of seven years with funding from the Sikkim State Government, is an amazing feat of engineering. In the year 1997, the Dalai Lama lay the statue’s cornerstone.

Samdruptse Hill, often known as the “wish fulfilling hill,” is only 5 kilometres from Namchi and is located at a height of 2134 m. (7000 ft). A massive statue of Guru Padmasambhava (Guru Rinpoche), the patron saint of Sikkim who has been bestowing his blessings for more than 1,200 years, adorns this legendary mountaintop. It is a 45 m tall monument that stands watch over the entire city. When the sun shines on it, the gold on its gilding sparkles. The hill provides a view of the beautiful Mt. Kangchenjunga in the midst of the densely wooded slopes beneath the painted blue sky.

Around the Samdruptse hill, there are several tourist attractions, such as the well-known Shiva Mandir, which houses a sizable figure of Lord Shiva and is a crucial component of the Solophok Chardham. To satisfy their urge for adventure, hikers can take advantage of the exhilarating routes that go to the adjacent Tendong Hill and Maenam Hill, with a side trip to the Maenam Wildlife Sanctuary and Tendong State Biodiversity Park. Along with the Samdruptse Hill, Namchi is also home to a number of stunning monasteries, including the Ralang Monastery, Doling Gompa, Ngadak Monastery, and Serdup Choling Monastery.

How to get there?

Samdruptse Hill is just 7 kilometres away from Namchi. Regular SSRTC buses and shared taxis run between the major Sikkim cities and Namchi, where one may rent a cab or board a bus to travel to this location.

The months of February through May and September through mid-December are the finest for visiting this location because of the pleasant weather and soul-satisfying scenery. The entrance cost is Rs. 30 for each adult.

Why Should I Travel?

At a dizzying 5,500 feet, Rinchenpong Monastery is located. The Kanchenjunga is beautifully visible from Sikkim’s third-oldest monastery, which is positioned on a mountain route. In addition to its gorgeous setting, this gompa is home to a statue of Ati Buddha who is seated in the Yab-Yum posture, which is uncommon in most other monasteries. This monastery has been a part of Rinchenpong village for for three centuries, and there is no way you can avoid it if you want to complete Sikkim’s history circuit.

Everywhere in Sikkim, the hamlet somehow enhances the splendour of a monastery. The gompa is located above the charming tiny town of Rinchenpong. Geographically endowed, this settlement provides a breathtaking view of the Kanchenjunga and other Himalayan ranges. One can appreciate Sikkim’s seamless fusion of historic buildings and environment as they ascend the route that surrounds the gompa, which is bordered by tall prayer flags that are swinging in the wind.

From Gangtok, Rinchenpong Monastery is a 4-hour drive away. After you arrive at Rinchenpong market, a meandering path leads upwards to the gompa. After around 1.2 kilometres on this walk, you will arrive at the monastery. Many visitors stop at Rinchenpong while travelling to Pelling. Before reaching Rinchenpong, which is located around 46 kilometres away from the latter, you cross the Singsore Bridge and Dentam. This is a beautiful lovely path, but make sure you consult with locals because landslides occasionally block this road.

What Time Should I Land?

The greatest time to visit Rinchenpong is during the summer. Sunrises here are much more spectacular if you’re staying overnight than they are in Pelling. The best way to start your day is with a morning stroll up to the monastery.

The snow-covered mountains provide a captivating scene in the winter. Mid-December is the best time to visit Rinchenpong since it changes into a winter paradise, providing you don’t mind the cold.

The statue of Ati Buddha, a humanoid thought to represent the “Primordial Buddha,” which is said to reflect the cosmos and its underlying knowledge, is the major draw of Rinchenpong Monastery. The Tibetan Buddhist sign of Yab-Yum (father-mother) is a female deity encircling the Buddha in the statue. While the feminine consort stands for knowledge and insight, the masculine god is symbolic of compassion. The majority of monasteries that are centred on the tantric teachings connected to Buddhism may be found with this statue.

Age-related wear and tear on this three-story gompa just adds to its peace as it stands firm in the face of the massive peaks that soar over the settlement. Due to the densely-clustered greenery, the route to the gompa is dim and makes for a lovely trek.