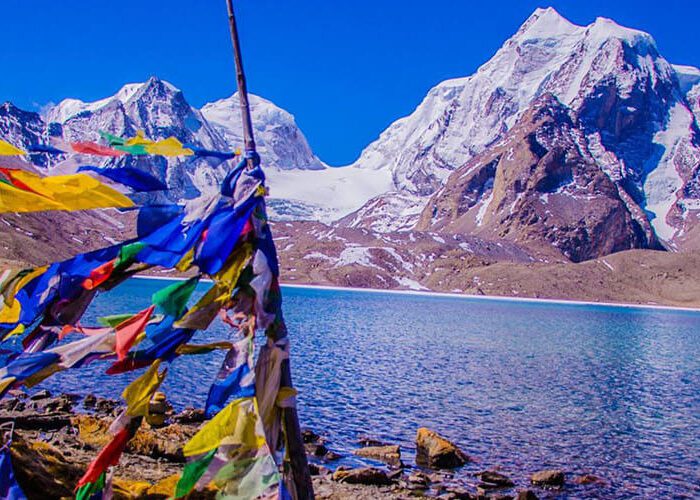 India’s smallest state, the charming and lovely Sikkim area, is located far to the northeast. This state is frequently regarded as the entryway to the nation’s Northeastern area because of its wealth in history, culture, and natural resources. Any lover of nature will fall in love with the state due to its lakes, waterfalls, and verdant woods. The delicious local food further enhances its allure. It is a historical location with religious significance thanks to its age-old monuments, architecture, and other cultural features. Here are our top 10 recommendations for why Sikkim ought to be your next trip destination.

Sikkim and Sikkimese culture are connected with glaciers, the outdoors, and spirituality. The Tsomgo Lake is a symbol for all of this. The alpine woodland and rhododendron blooms that surround the oval lake add to its attractiveness. The water in the lake during the summer is created by the melting snow from the surrounding glaciers and the snow-covered Himalayan peaks. When the lake freezes over in the winter, it makes for an amazing spectacle. Buddhist monks use the area as a place of introspection, and it is also said to have inspired them to make magical forecasts. It is a unique experience to visit the lake during the Guru Purnima celebration. During this event, faith healers may be encountered, and it is said that the lakewater acquires medicinal properties.

One of the main faiths in this state is Buddhism, and Sikkim is home to a number of magnificent Buddhist temples. His Holiness, the 16th Gyalwa Karmapa, resided in the Rumtek Monastery, which is a model of Tibetan Buddhist architecture. The tranquil atmosphere of the temple complex alone is sufficient to provide a state of serenity and reflection. This location’s golden stupa, an architectural wonder, is extremely breathtaking. Other stupas, such as the one housing the 16th Gyalwa Karmapa’s remains, are as stunning. The monastery showcases the history and tradition of the area with its elaborate murals and expertly created sculptures, which are typical of Buddhist workmanship.

Traders and conquerors alike entered the nation via the Nathula Pass on the historic Silk Road. This pass, which is located 4,310 metres above sea level, serves as one of the border crossing points between China and India but is not accessible to all tourists. The full length of the pass is restricted to Indian citizens with prior authorization. It is unquestionably one of the locations you should see while in Sikkim because it has played a significant role in the growth of the nation in terms of trade and international ties. The surrounding, sweeping meadows are covered in flowering junipers, miniature rhododendrons, and ground orchids. The Tibetan gazelle and other endangered animal species can be found in the area.

Thrilling experience of ‘END OF ROAD’

Yumesamdong, also known as Zero Point, is a place of perpetual snow that lies just beyond the Indo-Chinese border. It is very literally the end of the road and is a sight to behold, covered in sparkling snow. Though Zero Point is not frequently included in vacation itineraries, planning a trip there is unquestionably worthwhile. The charming landscape, with its gorgeous white backdrop dotted with spectacular azalea blossoms, is enhanced by the grazing yaks and wandering shepherds. Even if it’s not the best place to go in the winter, it does let visitors see the snow-capped mountains while they’re on their summer vacation.

One of the most magnificent views in this area is the Seven Sisters Falls’ strong surge of water cascading down the Himalayan hills. The waterfall is so named because the water cascades down in seven distinct phases, becoming even more stunning during the monsoon season. It certainly is a trip worth doing while in the area, located just north of the state’s capital. Visitors may unwind while seeing the grandeur of the cascading water in one of the several tea booths and watersheds dotted around the observation area. The natural beauty of this state is shown in the contrast between the green hillside with its tree canopy and the white water sheets streaming down the mountainside.

Any vacation experience must include food, and Sikkim has a lot to offer. While momos and thukpa may be found in a variety of small eateries around the nation, their greatest flavours can be found where they first originated. These delectable foods are prepared locally in each city and town, giving them a distinct flavour that is particular to that region of the state. Simply put, the diversity of meat and veggies improves the flavour of each dish. The bamboo soup, the pig curry, the tama, and numerous other less well-known meals are all equally good. Saelroti is a bread prepared from fermented rice batter. Another well-liked food from Sikkim is gundruk, which is fermented leafy green vegetables with Nepalese origins.

Sikkim’s diverse valleys each have a unique beauty of their own. One such area that is especially beautiful in the winter is the snow-covered Lachen valley, and the trip to the numerous overlooks is a delight in and of itself. The Tashi View Point, Kabi Lungtsok, and the Confluence of Lachen Chu and Lachung Chu are among the other tourist attractions in these regions. The trek from Lachen to Gurudongmar Lake is almost as spectacular as the holy lake itself. The Lachung valley, which is inhabited by the Bhutia and Tibetan people, is another such area, and is also known as the valley of rhododendron blooms and lush meadows where yaks come to graze. It is bordered by tall cliffs and snowy mountains. The Yumthang valley, often known as the “valley of flowers,” is another similarly beautiful valley location.