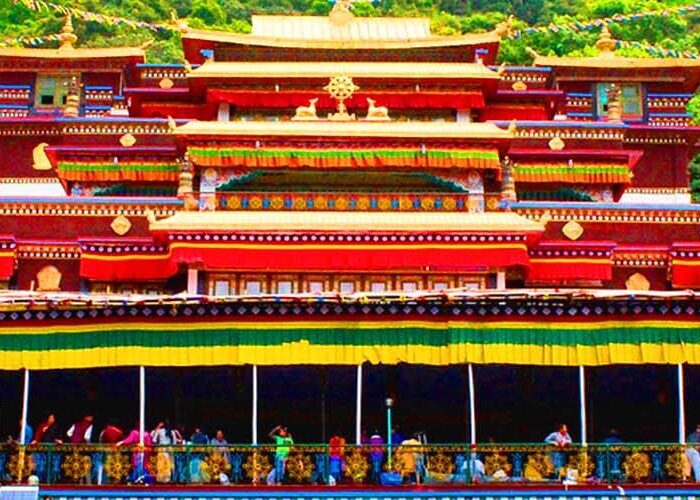 Lingdum Monastery, also known as Ranka Monastery and Pal Zurmang Kagyud Monastery, is located in Ranka, about 20 kilometres from Gangtok, the capital of Sikkim. The monastery, which was inaugurated in 1999, is built in a large and attractive location. Lingdum Monastery is ideal for individuals seeking serenity as well as those seeking visual beauty.

Lingdum Monastery, surrounded by greenery, is regarded as one of East Sikkim’s most beautiful monasteries. The monastery is about an hour’s journey from the city. Lingdum Monastery, erected in the late 1990s, does not have much historical and mythical significance to emphasise or discuss, unlike those built in the 17th and 18th centuries.

Lingdum Monastery, also known as Ranka Monastery, was built in the Tibetan architectural style and is an important site of prayer. The monastery also serves as a training facility for new and novice monks. Lingdum Monastery adheres to the Zurmang Kagyud tradition of Buddhism, which is led by the lineage’s 12th heir, Zurmang Gharwang Rinpoche.

Though Lingdum or Ranka Monastery is a relatively new addition to Sikkim’s extensive repertory of Buddhist monasteries, it easily wins the title for most scenic. The Lingdum monastery, located in the same mountain range as Rumtek, was built by Zurmang Gharwang Rinpoche, the 12th incarnation of Zurmang Gharwang of the Kagyu Sect of Tibetan Buddhism. Despite the fact that work began in 1992, it was not completed until 1999.

This magnificent monastic complex is built across 21 acres of lushly wooded mountain side and gives a spectacular perspective of the gorgeous mountains that surround it.

As you go in, you’ll be met with a slew of intricately carved prayer wheels. A huge courtyard in the centre of the compound has an impressive main temple. Inside the main prayer hall, a 5-metre-tall gilded figure of Buddha stands alongside a smaller statue of Guru Padmasambhava. It also has a significant collection of Buddhist texts. The walls are adorned with beautiful thangka paintings and colourful hand-stitched wall hangings.

In addition to the vehicle lot, the monastery complex offers a café and a small souvenir shop for guests.

The ideal months to visit, like with all other sites in Sikkim, are March to May and September to October. If you are a cultural lover who wants to explore monasteries, you should go during Lhosar, which is the Tibetan New Year. The majority of monasteries commemorate it with tremendous fanfare and delight. Another event named Gutor is observed at the Lingdum Monastery just two days before Lhosar, which normally falls between the months of January and February. Incredible masked dances are done to depict good triumphing over evil. It is unquestionably a visual feast!

The Lingdum Monastery is located in Ranka, a little town around 16 kilometres from Gangtok’s main metropolis. On the same path, there is another well-known site named Banjhakri Falls. The road to the monastery is in poor condition, therefore it is best to rent a bigger vehicle to transport you there from Gangtok.

Unlike other monasteries, the full Lingdum Monastery grounds are available to tourists. Take care not to disturb the monks and obtain permission before taking images.