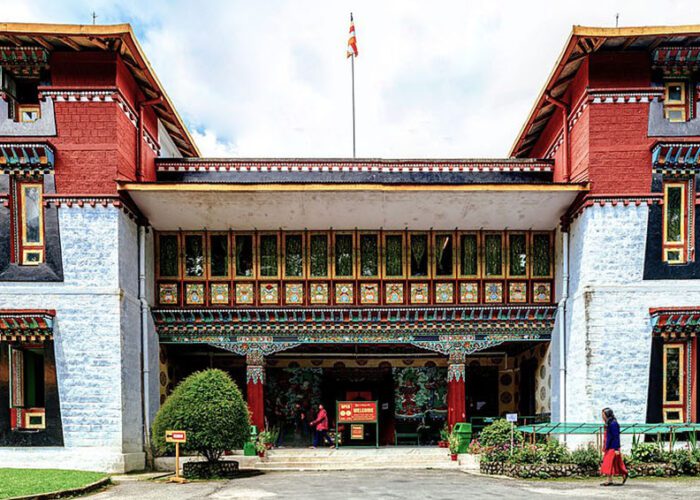 The Namgyal Institute of Tibetology has funded and encouraged study on the religion, history, language, art, and culture of the Tibetan cultural region, which includes Sikkim, since its inception in 1958. The NIT library houses one of the world’s greatest collections of Tibetan books outside of Tibet, as well as a museum of Tibetan iconography and religious art. Since 1964, it has produced the Bulletin of Tibetology as well as several publications.

Tashi Namgyal, the 11th Chogyal (king) of Sikkim, donated the land on which the institute was built, giving rise to the institute’s name.

The large silver Manjushri picture, carried all the way from Tibet, is one of the first artefacts that strikes your sight. Manjushri is the ‘Gentle-Glory’ Bodhisattva of knowledge and understanding.

Ancient thangkas (traditional Buddhist scroll paintings), coins, trumpets made of human bones, ceremonial artefacts, currencies, amulets, and idols are shown in glass cases. A palm leaf book from the 11th century and a Chinese text from the 12th century from South Korea are also on show. Kasyapagotra and Madhyama were two Asoka-era Buddhist missionaries whose remains are housed in finely crafted caskets at NIT.

A visit to Sikkim would be incomplete without attending a live history lecture at the Namgyal Institute of Tibetology (NIT). A visit here will provide you with a greater knowledge of Buddhism and Tibetan socio-religious values as a traveller. This institute, in addition to housing a substantial collection of Tibetan/Buddhist artefacts, is one of the major repositories of Tibetan literature outside of Tibet. As a result, NIT is a must-see for anybody interested in religious art and iconography. The main structure embodies the beauties of Sikkimese architecture perfectly.

The current Dalai Lama lay the foundation stone for Namgyal Institute of Tibetology in 1957, and the museum was officially opened the following year by Jawaharlal Nehru, then Prime Minister of India.

The museum and library are open from 10 a.m. to 4 p.m., Monday through Saturday. The admission cost is only ten dollars. Keep in mind that the institute is closed on national holidays.

NIT is a little more than 2 kilometres from Gangtok town, and you can take a cab directly to the gate. If you are staying in downtown Gangtok, request that the driver transport you to Deorali in the south.

The Do-Drul Chorten Stupa is a short walk away, and you may take a leisurely journey to this popular hilltop building.