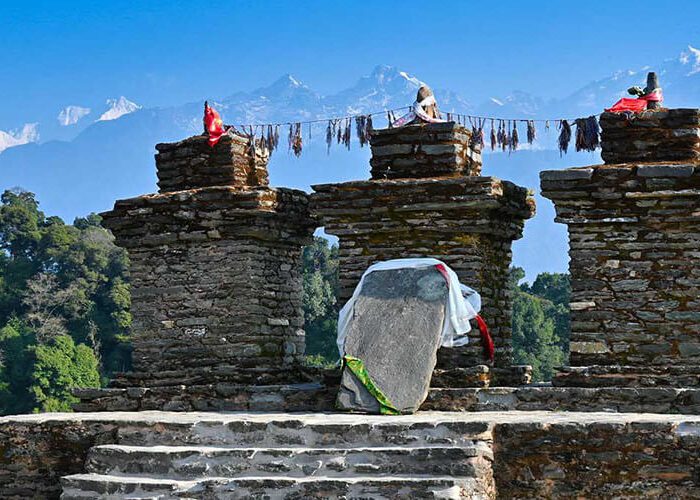 Rabdentse Ruins is an ancient monument that portrays the narrative of Sikkim’s greatness. It was the second capital of Sikkim, created by Chogyal II, until 1814 A.D. Following the Nepalese invasion in the 18th century, the palace and monastery complex was demolished and transformed into ruins. The location is a must-see for history buffs who wish to delve into the state’s past while admiring the beautiful vista of Kanchenjunga peak and the rushing river that flows through the foothills. The Rabdentse Palace remains are simply a short walk through the deep woodland on the route to Pelling from the Pemayangtse Monastery.

As one approaches the gate, the chestnut trees greet visitors by falling mosses on them and lead to the stone throne, which consists of three standing stones known as ‘Namphogang,’ where the judges used to proclaim the ultimate verdict. Walking a little farther, one will come to the remains of the ‘Taphap Chorten,’ which served as the palace’s entrance, while the ruins are located in the center of the fourth courtyard, which provides a breathtaking perspective over Sikkim’s southwestern area. This is next to ‘Dab Lhagang,’ where the royal family used to pray to their deities. A white marble slab can be seen nearby, which was formerly the location of the monastery known as “Risum Gompa.”

Why should I visit this?:

The greatest time to visit Pelling is during the warm months of March through May. The weather is lovely, and the days are clear and sunny. Winters, or the months between December and February, convert Pelling into an entirely other personas, with temperatures ranging from minus zero to 14 °C. The upper mountains are snow-covered, providing a spectacular perspective of the Himalayas, including the colossal Kanchendzonga, India’s highest peak.

Rabdentse’s nearest town is Pelling, which is around 100 kilometers from Gangtok in West Sikkim. To get here, you may take a cab. A stroll from Pelling town to Rabdentse is the best way to get there. If you walk at a reasonable pace, it will take you roughly an hour to get here. On the way, stop at the Pemyangste Monastery, which is well worth a visit. If you don’t want to walk, you may take a cab to Pemayangste, where the ruins are only a fifteen-minute walk away.

Exploring the remains of Rabdentse, the medieval capital of the ancient kingdom of Sikkim, is like peering through a looking glass into this Himalayan state’s interesting history. Endless power struggles, scheming members of the royal family, hostile neighbors, and exiled rulers all contribute to a colorful past.

Rabdentse’s history dates back to the 17th century, when the second Chogyal (king), Tenstuk Namgyal, decided to relocate his capital from Yuksom in West Sikkim to Rabdentse. Rabdantse, however, was brutally destroyed by the invading Gurkha army in the late 18th century, leaving it in ruins.

In the 1600s, amidst the lush forests that blanket the hills near Pelling, came the kingdom of the Namgyal dynasty, which governed Sikkim for the following 333 years.

The Rabdentse ruins are located in a valley southwest of the Pemayangtse Monastery, one of Sikkim’s oldest and most significant monasteries.

As you pass through an elegant gate to the ruins of Rabdentse on the Pelling-Geyzing road, a magnificent walk through a forest of chestnut trees, via an exquisite lake, leads you to the remnants of the fortress wall that once encompassed this medieval city. A little higher up, you’ll come to the Namphogang—three massive chortens standing sentinels on an elevated stone platform, overlooking the surrounding mountains. From here, the Chogyal and his courtiers carried out their daily duties as monarch and spiritual leader, making key decisions and passing judgments. Next to the Namphogang is the king’s austere stone throne, which is still in place.

The remains of the royal enclosure to the north have an open square that housed the now-defunct Dab Lhagang. This was the royal family’s prayer room, apart from the southern wing, which was available to the public. The ASI was also able to identify remains of significant sections like the king’s personal apartments, a room for guards, an assembly room, the royal kitchen, and the public courtyard after another phase of excavation.

There was also a religious space for commoners on the property. Many carved relief figures were discovered here and are currently housed in the adjoining sculpture shed.