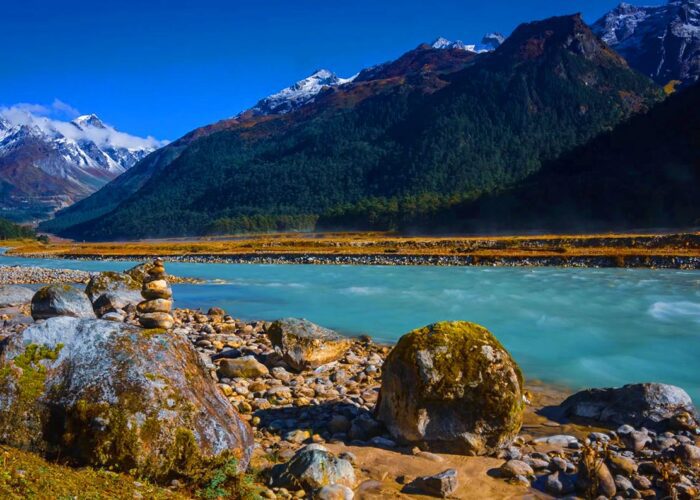 Things to do in Lachen

Lachen, a charming town in North Sikkim surrounded by the beautiful Himalayas, serves as the entry point to some of Sikkim’s most well-known tourist destinations. Looking for entertaining activities in Lachen? For starters, it serves as the unofficial base camp for hiking and is undoubtedly a sanctuary for those who love the outdoors, are seeking solitude, are compulsive shoppers, and are adrenaline addicts. The cherry on top is that it’s close to both the Rhododendron Sanctuary and the Kanchenjunga National Park.

10 special things to do in Lachen

Take a trip to Gurudongmar Lake

Visiting Lachen’s most well-known lakes, the Green Lake and the Gurudongmar Lake, is the focus of the city’s tourism industry. One of the most well-known treks in Sikkim is to Green Lake, which offers a great chance to see some wildlife and rare bird species. The Gurudongmar Lake, on the other hand, is surrounded by the stunning Kanchenjunga peaks and revered by the people. According to legend, the Guru Padmasambhava, who founded Tibetan Buddhism in the eighth century, blessed it. The residents and the local fauna now get their freshwater from this once-frozen lake.

Reminder: You need a permit to access these lakes. Foreigners are not permitted.

You must schedule a trip to the Kanchenjunga National Park if you are going to Lachen. The national park, which is also a UNESCO World Heritage Site, is home to several glaciers like the Zemu glacier and a wide variety of animals, including clouded leopards, snow leopards, musk deer, and others.

Trek to the hills and valleys of Lachen

Trekking to one of the nearby lakes and valleys is among the most well-liked activities in Lachen. Lachen’s hiking paths are surrounded by jagged mountains, a thriving biome, and stunning vistas. Even though the terrain might be pretty difficult and the weather is unpredictable, you’ll still have the best time ever doing it! Be ready, do your homework, make a schedule, and, as a precaution, have a physical examination before you depart.

Visit a monastery and ask for blessings

Visiting a Buddhist Monastery is among the best things to do in Lachen, Sikkim. What other monastery is there to visit besides the well-known Lachen Gompa or Lachen Monastery? These monasteries are among the oldest in Sikkim and a fine illustration of Tibetan architectural design. The Annual Mask Dance Celebration is another draw in this area. It is a riot of colour that cannot be missed!

One of the most popular outdoor activities in Lachen is bird viewing. Nature enthusiasts and bird watchers will find paradise in Northern Sikkim. Wherever you travel, you may always see fresh and fascinating bird species that migrate here starting in April. Visitors can view black eagles, Indian cuckoos, streak-breasted scimitar babblers, and other birds when birdwatching in the area.

Bring some binoculars with you.

Try to recognise birds by their cries while remaining silent.

Take a guide who is familiar with the area and is knowledgeable about where to look for certain birds.

Numerous uncommon and unusual animal species may be found in Sikkim. While walking to the Green Lake and Chopta Valley in the Kanchenjunga National Park, travellers may see some incredible species, including Wild Yaks, Himalayan Bears, Red Pandas, Musk Deer, and others.

Your first priority when planning activities in Lachen in April should be a trip to the Rhododendron Sanctuary. Up to forty different kinds of Rhododendron can be found in the sanctuary. Although one may see these blooms all around Northern Sikkim, the sanctuary’s collection is spectacular. The greatest season to go is in the summer (April–July), when the flowers are at their peak.

Northern Sikkim is home to the breathtaking Himalayan settlement of Lachung. Lachung’s surroundings are made up of roaring waterfalls, high, shadowy mountains, flowing rivers, fruit orchards, and much more. Along with the wealth of natural beauty, Lachung offers guests a variety of outdoor pursuits including river rafting and paragliding.

Buy everything you can

Lachen might not be your typical shopping haven, but this charming Himalayan town does have a few treats that tourists can buy and bring home. The natives in this area produce and market exquisite handicrafts as well as a variety of pure woven handloom goods. You may purchase items like handcrafted shawls, purses, rugs, hats, bags, and wooden items while you’re here.

Try some of the great Sikkim food

The best is saved for last; experiencing a new location’s delectable cuisine is one of the most thrilling aspects of travel. Additionally, Sikkim never disappoints when it comes to gastronomy. You’ll discover that Nepali food has had a significant effect on the local cuisine here. Almost every meal includes rice, which is a basic food. Make sure you sample as many meals as you can while you are in Sikkim since the cuisine there uses fresh ingredients from the region and has distinctive flavours.