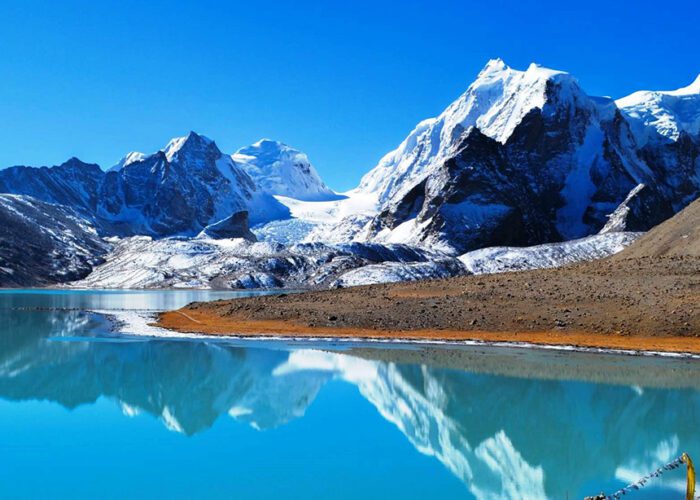 It is one of East Sikkim’s most popular tourist routes. People who arrive in Gangtok through Pakyong after taking the Silk Route through Tsomgo Lake shouldn’t make separate plans to take this route. The locations Tsomgo Lake and Baba Mandir are already covered. You cannot enter Nathula Pass from Rangoli with your Silk Route tour permission. It can only be purchased in Gangtok. Therefore, before you reserve the package tour for the Silk Road, contact your tour operator for permission to use the Nathula Pass.

Tso means lake and Mgo means head in the Bhutia language. The origin of the lake is, thus, the meaning of Tsomgo. Tsomgo Lake is located at a height of 12,400 feet and extends for one kilometre. It is 40 kilometres from Gangtok. Tsomgo, sometimes referred to as Tsomgo Lake, is a holy lake for both Hindus and Buddhists. It is round in shape and almost 15 metres deep. East Sikkim takes great pride in this glacier lake.

Due to its tranquilly and natural beauties, Sikkim visitors must visit this place. Brahmini ducks and other migratory birds temporarily reside in Lake Changu.

Winter is the best season for those who want to explore the snow-covered lake. The lake is always covered with snow from January through March.

In the snow, tourists may be seen having fun. They may play in the snow, stroll across a frozen lake, go yak riding, and visit a shrine dedicated to Lord Shiva in addition to taking in the mysterious natural beauty. The greatest season to take in the scenery of the lake’s aqueous surroundings—great mountains—is summer. The blooming season for flowers including blue and yellow poppies, rhododendrons, irises, and primulas lasts from May through August.

One of the most important places to visit in East Sikkim is Baba Mandir. a shrine dedicated to Baba Harbhajan Singh, an Indian Army veteran who perished not far from the Nathula Pass. The New Baba Mandir was constructed adjacent to Changu Lake, while the Old Baba Mandir is situated in the Kukup Valley (Bunker), where he was sent. This temple is 56 kilometers away from Gangtok and is surrounded by breathtaking natural beauty. The trip by car from Baba Mandir to Nathula Pass is approximately 8.5 kilometers long and takes 20 minutes. Additionally, it takes 30 minutes by car to travel the 16.3 kilometers (about) between Tsomgo Lake and Baba Mandir.

Tourists can reserve a package for a visit of Tsomgo Lake, Nathula Pass, and Baba Mandir from Gangtok. Except for Monday and Tuesday, Tsomgo and Baba Mandir are accessible every day; however, Nathula is only permitted five days a week. You must submit an application for authorization to visit Tsomgo Lake, Nathula Pass, and Baba Mandir together with a copy of your photo ID and two copies of current passport-size photos. On your behalf, the hotel owner or your tour guide will collect all of this. Tsomgo Lake is 38 kilometres away from Gangtok, while Nathula Pass is 56 km away. The cost of the package may range from INR 750 to INR 1,000 (based on the season).