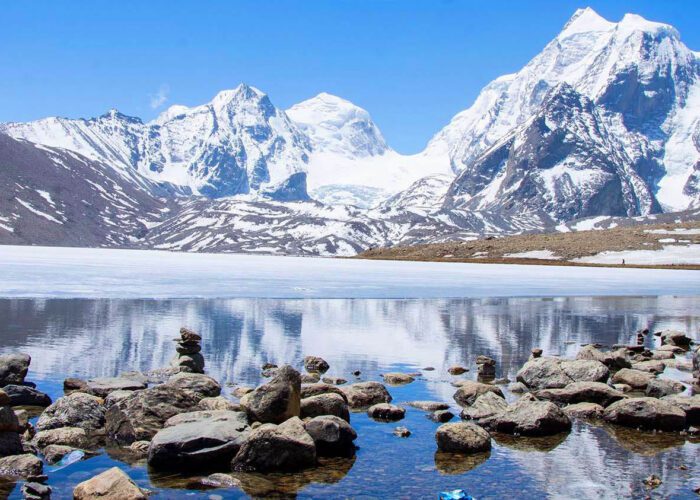 The Lachen-Lachung portion of the circuit is often all that is available to visitors to North Sikkim. These charming towns serve as the starting points for trips to North Sikkim’s higher elevations since they are still relatively unexplored by visitors. Have you, however, ever heard of the magnificent Gurudongmar Lake, sometimes known as the “Jewel of Sikkim”?

Only after visiting this immaculate lake firsthand do you realise that calling it such is not an exaggeration. The sacred lake is one of the most amazing locations you will ever see since it is so absolutely beautiful and serene. The lake’s azure waters glisten in the early-morning sunshine while the clouds above it cast erratic shadows.

The lake is often visible from the parking lot, but if you’re feeling adventurous, you may descend to its base via the concrete steps on the parking lot’s left side. The steps take you to the base of the lake, where you get an even greater view, and are flanked on either side by prayer flags. Take it extremely carefully when you ascend the steps to the parking lot on the way back! At Gurudongmar, where prayer flags are flapping in the breeze, there is a surreal sensation of tranquillity.

Gurudongmar is one of the world’s highest lakes, perched at a height of 17,800 feet, and has long been an important Sikkim pilgrimage destination and tourist attraction. After making the necessary prayers and offerings, it is stated that the pious are able to view the future in the shape of letters or scenes on the lake water.

Gurudongmar, which is short for “The Red-Faced Guru,” is sometimes pronounced “Guru Dragmar,” which refers to the angry, red-faced aspect of Guru Padmasambhava. Then, Guru Nanak, who is thought to have visited the area, is credited with giving the lake its name, while Guru Rinpoche is also sometimes mentioned. Thus, the lake continues to be a well-liked Sikh and Buddhist pilgrimage destination.

You will travel through an army area where using a camera or a phone is highly forbidden as you get closer to Gurudongmar. At a height of 12,700 feet, you will witness army personnel jogging in the morning. When you get to the Thangu checkpoint at 13,000 feet, you will then pass through Kaleb. You may also stop here at Munres Dosa Point, the highest dosa point in the world, to satisfy your appetite for South Indian food. Don’t forget to get popcorn at this checkpoint; it will help you breathe more easily at a high altitude.

You’ll be taken aback by the route’s abrupt transition from a narrow, uneven, and bumpy road to a wider, concrete road on the final leg to the lake.