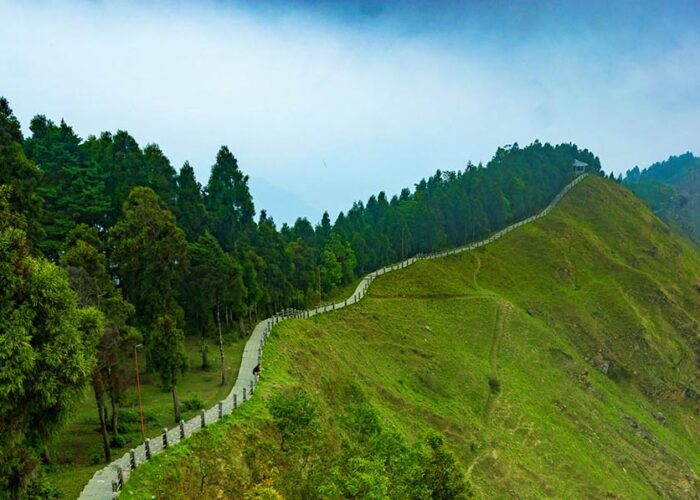 Tarey Bhir is a fantastic attraction for those who enjoy natural thrills. It is located in a picturesque setting in the rural hamlet of Sadam, which is about 18 kilometres from Namchi. The word ‘Bhir’ means cliff in Nepali, and the length is around 10,000 feet, with a breathtaking viewpoint at the edge from which people can get spectacular views of the river valleys below, the lush green forest coverage, and a panoramic view of the confluence of the two rivers of Sikkim, Teesta and Rangit.

Tarey Bhir also provides a thorough view of the tea garden, which is splayed on a sloppy hill of Peshok and is lined by a train of residences that runs along the route to Darjeeling.

While trees such as Nepalese Alder, beech, and cherry dominate the region’s vegetation, the area is also home to a variety of birds such as rusty-bellied shortwing, crimson-horned pheasant, kalij, and others, as well as snakes such as cobra, krait, and viper.

You may visit Sikkim during the months of March and May, or September and November. During these months, the weather is generally beautiful, with bright and sunny days that are excellent for admiring the grandeur of the hills. The months of December through February are often fairly chilly. Despite this, many tourists prefer winter. Monsoon season, which lasts from May to August, brings torrential rain, making the perilous stroll down Tarey Bhir slightly risky.

A hike down Tarey Bhir provides for an exciting day excursion from Namchi, South Sikkim’s main town. To reach here, take a taxi from Namchi that travels to Sadam. The road splits in two along the way, and you must follow the route to the right. Tarey Bhir is located around 16 kilometres from Namchi, near the little settlement of Sukhbarey. The route begins with a shabby state tourist board.

Do not leave litter in the area, and bring your waste with you. Wear adequate walking shoes and avoid plucking any plants. If you have a phobia of heights or vertigo, this trek might not be the ideal option for you.

The trek begins with a downward paved pathway. The perilous yet attractive path is erected on top of a mountain and is surrounded on one side by bottle green pines and on the other by a lighter green carpet of grass, moss, and small bushes. The walkway, which is reminiscent of bridges and paths erected in China’s hilly regions, goes to the brink of a cliff with expansive views of the neighbouring Himalayan peaks. You can also view the Darjeeling and Kalimpong hills from here, which are at a lower elevation. It also provides stunning views of the confluence of two rivers, the Teesta and Rangit, which meander through the valley below.