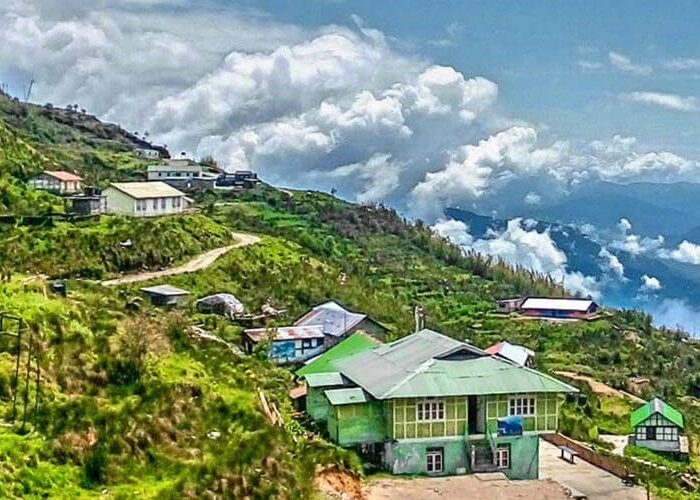 Temi tea plants were established in 1969 by the Government of Sikkim and grow along the steep slopes of the hills coming from the Tendong Hills, ranging from 120o to 1800 m. Temi’s 177-hectare-spread gardens provide premium-quality tea leaves with international demand. The path to the processing factory is characterised by well-trimmed cherry blossom trees amidst meadows filled with ferns and grazing grasses along reach Tendong Hill.

Once you get in the garden, the breathtaking views of Khangchendzonga wrapped in snow utterly enthral guests and leave them speechless. Temi Tea Estate is Sikkim’s sole tea garden, producing around 1 lakh kg of tea per year using an organic approach in accordance with the requirements of Switzerland’s Institute of Marketecology (IMO).

A magnificent 440-acre tract of land covered with emerald-hued tea plants is nestled among the towering snow-capped mountains of South Sikkim. Despite tough competition from its rivals in neighbouring Darjeeling, Temi Tea Garden, Sikkim’s lone tea growing district, has established itself as one of the world’s greatest tea producers in several auction houses. The Chogyal (King) established the plantation in 1969 to offer work to Tibetan refugees who fled to Sikkim following the Chinese invasion.

The vintage home inside the tea garden is a great location to relax during your stay. The cottage, built by Scottish missionaries in the early 1900s, transports you back in time with its colonial architecture, functioning fireplace, and wooden furnishings.

During your stay, you will learn the subtleties of tea production, from picking to culturing. If you’re feeling adventurous, you can even go paragliding to see some breathtaking views of the area.

The greatest time to visit this gorgeous place is from March to May, when Temi Tea Garden is decked with lush fields of eye-catching rhododendrons and orchids. During the winter, the calm and clear air makes it ideal for touring and spending some pleasant minutes amidst this wonderful scenery. If you wish to visit in the winter, November is the best month to explore this exquisite sanctuary, which is adorned with lush green ferns and flowering cherry blossom trees.

By Air – Bagdogra Airport is the closest airport to the state of Sikkim, and it is roughly 124 kilometres from Gangtok, the capital city. This airport has great access to a number of key cities, including Guwahati, Delhi, and Kolkata. You may also take use of the helicopter service provided at Bagdogra Airport, and then use cabs and taxis to get about the city.

By Road — Sikkim is well connected to major cities by a well-maintained road network, and it is easily accessible via prime road routes from West Bengal’s Kalimpong and Siliguri. You may also use the Sikkim Nationalized Transport Facilities, which provides frequent bus service along these important routes. Taxis and cabs may be hired to get to many important regions of the city.

By Rail – The New Jalpaiguri and Siliguri Railway Stations in West Bengal are 126 kilometres and 114 km apart, respectively. To get from Namchi to Temi Tea Garden in South Sikkim, you can hire a vehicle.

Just go  on with simple and loose attire if you are seeking to enjoy the garden to the fullest. While trees such as Nepalese Alder, beech, and cherry dominate the region’s vegetation, the area is also home to a variety of birds such as rusty-bellied shortwing, crimson-horned pheasant, kalij, and others, as well as snakes such as cobra, krait, and viper.