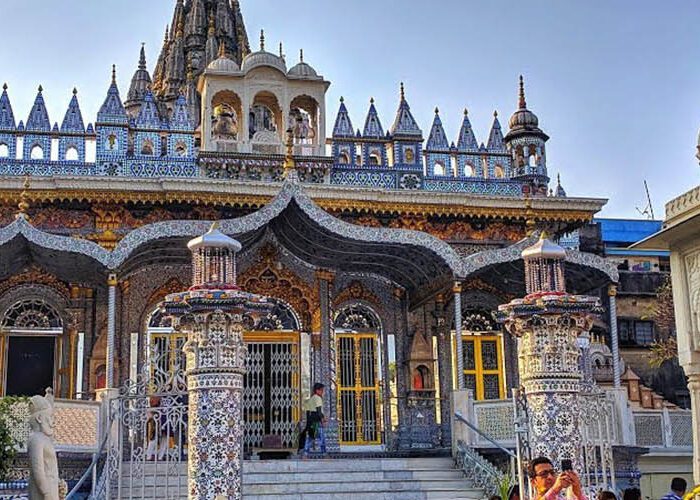 Thakurbari is a Hindu temple located on MG Marg in Gangtok, Sikkim, 500 kilometres from Gangtok SNT Bus Station. It is one of the most popular destinations to visit in Gangtok and one of the oldest Hindu temples in Sikkim, and it is located in the centre of the city.

It was established in 1935 as a tiny temple on land granted by the former Chogyal of Sikkim. Following that, between 1945 and 1947, the temple was developed to a significant temple complex. The temple has practically all of the major deities and has developed as an important point of convergence for Gangtok’s Hindu population. The temple complex was expanded in 2011 to incorporate a multipurpose hall and a library.

On a huge scale, the temple arranges several festivals and social gatherings. These festivities attract a great number of visitors and tourists from all over the world. Visitors gather here to worship the Lord and to accept his blessings.

The Thakurbari Temple in the centre of Gangtok provides proof that the Chogyals, the emperors of the erstwhile country of Sikkim, were religiously tolerant. The site for the temple was granted by a Namgyal dynasty prince in 1935, and it is one of the region’s oldest Hindu temples.

The Thakurbari Temple draws people from all around the country. This temple is a must-see for visitors who come to Sikkim to see the religious monuments and constructions. Thakurbari Temple is home to all of Hinduism’s most prominent deities. The building is unremarkable, yet the peacefulness of the inner sanctuary contrasts with the clamour and bustle of the city.

Visitors can visit the temple from 6 a.m. to 8 p.m. The ideal time to visit this temple is early in the morning, when the priests perform their rites and you can get a peek of Sikkim’s Hindu population.

Take a taxi from MG Marg Market and proceed south-east to Tibet Road. Take a left into Bhanu Path Road, then a quick left onto NH10. MG Marg is a 10-minute drive from Thakurbari Temple.

Take a trip down to this temple if you want to get a feel for Gangtok. While it may take a little longer to get there, you will come across a lot of kind locals who will lead you to this sacred centre.

Following are the modes to reach the temple:

If you visit this temple during October and November, your visit may overlap with Chhath Puja. Thakurbari Temple celebrates this old Hindu Vedic festival with zeal. It is said to be the most environmentally friendly of all Hindu festivals, and it is centred on Surya, the Sun God, the god of energy.

Aside from Chhath Puja, Thakurbari Temple celebrates a number of Hindu festivals throughout the year. If you’re lucky, you’ll be there when a light and sound performance is put on for travellers and pilgrims.