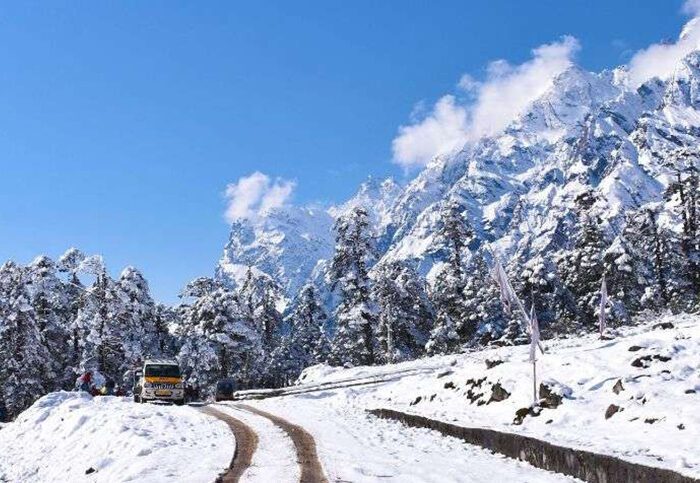 Places to visit in Sikkim during Winter

Who said the promised land had to be tropical? The tourist destinations in Sikkim in December do not reflect this, as seen by the steep hills, frozen lakes, frigid temperatures, and fluffy snow.

Sikkim may be explored in all four seasons, although the winter months are particularly captivating. Right? One of the key causes for the high number of visitors that book a winter getaway to Sikkim in December is the region’s snowfall.

Turn off your winter hibernation mode and visit these sites to see in Sikkim in December to create “Frosty the Snowman” if you want to make the most of your December holidays.

Enjoy the shopping extravaganza in Gangtok

Gangtok Hill Station in May: Tourist attractions in Sikkim

Gangtok, the state’s capital, is renowned for its monasteries, handicrafts, and abundance of natural beauty. Gangtok is one of the greatest destinations to travel to in Sikkim with family in December since there are so many attractions to see and activities to do. In December, take the family on a winter trip to Sikkim to take advantage of the region’s chilly temperatures, shopping, and mesmerising views of the majestic Kanchenjunga.

You cannot afford to miss Gangtok because it serves as a launching point for exploring the remainder of Sikkim. You may take a gondola ride and take in the town’s picturesque splendour for a great experience. Additionally, while there are numerous locations to view in Gangtok, snowfall is uncommon.

Glance at the Frozen Wonder at Tsomgo Lake

Tsomgo Lake must be at the top of your list of Sikkim attractions to see. One of the nicest vistas in Sikkim is a mountain covered in sheet ice with migrating birds flying all around. For visitors coming from all over the country with their friends, family, and significant others, this scenic beauty is a treat.

At an elevation of almost 12,300 feet, Tsomgo Lake, also known as Changu Lake, fully freezes over in December due to unusually low temperatures. This makes Sikkim the perfect destination for snow enthusiasts. With snow-capped peaks as a background, the entire area is enchanting, providing opportunities to make joyful memories.

Observe the Beauty of the Crystal Clear Water at Gurudongmar Lake

Gurudongmar Lake, one of the highest lakes on earth, is located 17,200 feet above sea level and is one of the top spots to visit in North Sikkim in December. This area in Sikkim is wonderful to visit in the wintertime since it is surrounded by snow-capped mountains and blue lake waters. You may enjoy Gurudongmar Lake’s splendour and take some breathtaking pictures.

Gurudongmar Lake bears Guru Padmasambhava’s name. The location also houses a modest temple honouring the guru. You could also ask if this lake freezes over in the winter, however that is untrue. Even at the coldest temperatures, gurudongmar never solidifies.

Yumthang Valley, sometimes referred to as the “Valley of Flowers,” is one of Sikkim’s top tourist destinations in December for newlyweds. The area is covered in white sheets of snow, making it a visual delight and providing a romantic atmosphere for couples to rekindle their love.

The valley, which is 8,800 feet above sea level, is a popular destination for snow lovers and adventure seekers.

Witness the magnificent dawn while visiting Yumthang Valley to make your trip unforgettable. You’ll enter a mystical world as a result of the cool air, surrounding snow, and the cold weather.

It is now recognised as a popular tourist attraction, and the stunning views of the eastern Himalayan mountain ranges, which include Kanchenjunga, have drawn numerous Indian and international visitors to this lovely location in Sikkim.

The Teesta River, which is popular for river rafting, draws many thrill-seekers from all across the nation. However, the river becomes an ice sheet in December. You can still see the river and take in the beautiful surroundings. Here, you may enjoy some alone time while gazing over the snow-covered landscape.

This river originates in the towering Himalayas in Tso Lhamo and travels through Sikkim and West Bengal before entering Bangladesh. Additionally, one of the top tourist attractions in Sikkim in December is photography at the Sangam point between the Teesta River and its offshoot, the Rangeet River. Because it is quite chilly outside and you do not want to get sick while travelling, don heavy, woollen clothing.

Your Sikkim itinerary must include a stop to Rumtek Monastery because it is among the greatest locations to see in Sikkim close to Gangtok in December. This stunning monastery, known for its exquisite design, is built as a three-story building.

The monastery also has several interesting artefacts and Buddhist religious fine art on exhibit. Whether you believe in Buddha or not, you must visit Rumtek Monastery in Sikkim in December.

Both visitors and locals are drawn to the colourful monastery that is close to Gangtok. Rumtek Monastery is a must-see location in Sikkim for photographers, pilgrimage travellers, and even persons looking for inner serenity.

Visit This Piece of Heaven in Winter at Nathula Pass

Discover Nathula Pass, one of Sikkim’s stunning locations to visit in December. It is a high altitude pass and one of the highest motorable highways in the world, rising 14,140 feet above mean sea level. Nathula Pass welcomes hundreds of travellers each year because to its stunning splendour and a cool mountain wind. You may hike to the valley while taking in the beautiful scenery and the tranquil setting.

Sikkim experiences exceptionally chilly weather in December and you may see snowfall even though it is blanketed with snow all year.