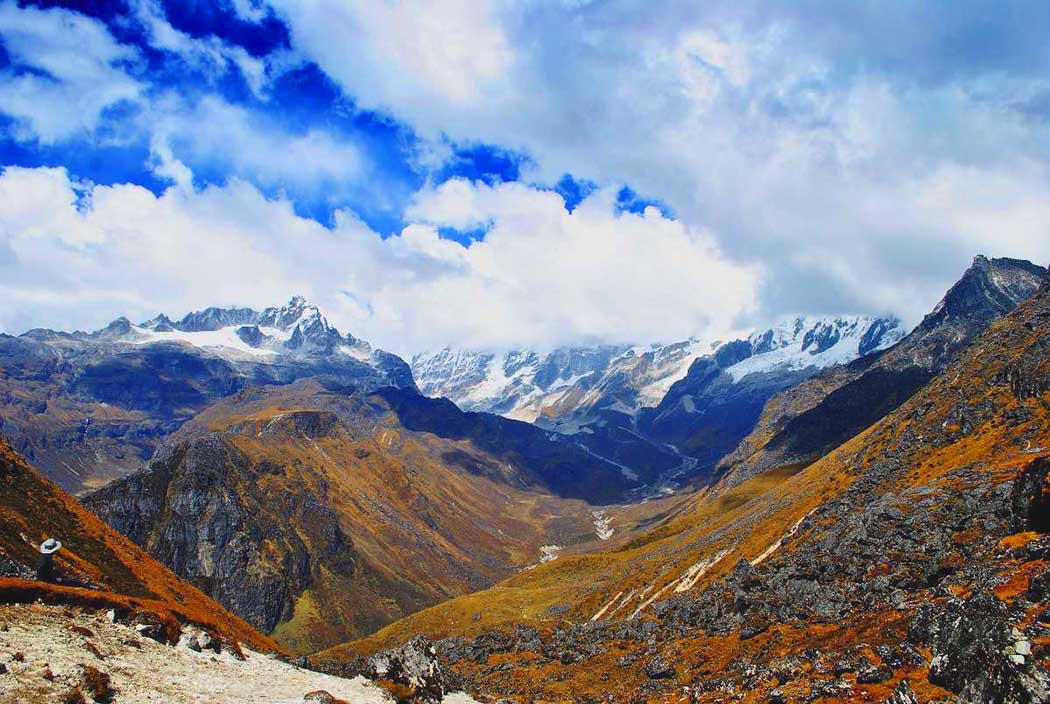 April ushers in spring in all its beauty in the Sikkim Himalayas, with valleys carpeted with flowers and frozen lakes and streams thawing, practically bringing the hills to life. The sky is a beautiful cerulean blue, the mountains are all colours of green, and the air is full with the pleasant scents of blossoming flowers.

April is one of the greatest months to visit Sikkim, especially if you are an outdoor enthusiast, with clear days and plenty of sunshine. Trekking, river rafting, and paragliding are all popular activities at this time of year.

In Gangtok, the weather shifts from chilly to nice, with temperatures ranging from 10°C to 20°C. From April through October, the state has its busiest tourism season. The International Flower Show in Gangtok is in full flow, with an amazing array of orchids, rhododendrons, and other local flora.

During the month of April, nothing beats a bird’s eye view of Gangtok, its surrounding Himalayas, and snow-capped summits. Paragliding is your best choice because it requires no prior training or skill. If you’re interested, you may contact a variety of certified operators in Gangtok. If you’re not an adrenaline junkie, the Deorali Ropeway, which runs from Deorali Market to Deorali, will provide you with some magnificent vistas.

Visit the renowned Rumtek Monastery, just 23 kilometres from Gangtok, for a look into this little Himalayan state’s rich cultural legacy. The monastery is the home of the Black Hat Order, which is led by the Karmapa, and is a stunning example of Tibetan-Buddhist architecture. It holds some of the most valuable thangkas and holy texts in the world. The view of Gangtok city from here is really stunning, so don’t miss it.

If you’re visiting Gangtok in April, you can’t miss a trip to the Kyongnosla Alpine Sanctuary. The 31-square-kilometer region, which is about 30 kilometres from the city, is heavily covered with rhododendrons, primulas, orchids, irises, and other flowering trees and plants, all of which are in full bloom during the month.

Since Tsomgo Lake is just 30 kilometres distant from Kyongnosla, you might as well continue on. This glacier lake, which froze over the frigid winter months, begins to evaporate by April. Around this time, the neighbouring forests, which include rhododendrons, primulas, and other wild flowers, begin to bloom, creating a breathtakingly stunning environment.

Nathu La, at a height of 14,000 feet, is only 16 kilometres from Tsomgo Lake. This ancient mountain pass was formerly a part of the fabled Silk Route, which linked India to Tibet and China. The pass is snow-covered until the third week of April, providing for a fun day excursion from Gangtok for snow fans.

The Picnic Days of North Sikkim

Head 100 kilometres north of Gangtok to Lachung to get a taste of Sikkim’s rural life. One of the most attractive regions of the Himalayan state is this little mountain town, which is located at an elevation of 8610 feet. It is at its finest in April, with temperatures ranging from 5 to 18 degrees Celsius. After a night here, proceed to Yumthang Valley, which is about a three-hour journey away. In the month of April, Yumthang Valley appears completely unreal, with rolling meadows blanketed in flowers from poppies, primulas, irises, and rhododendrons; dazzling mountain streams, hot springs, and a tributary of the Teesta cutting through the valley. Zero Point, also known as Yumesamdong, is located 23 kilometres north of Yumthang.

If you enjoy the outdoors, Lachen, another lovely village in North Sikkim, is a must-see. It is 47 kilometres from Lachung and serves as the starting point for a number of treks in North Sikkim. One of the most rewarding walking routes in the nation is the Green Lake Trek to the base of Mount Kanchendzonga. It may not be everyone’s cup of tea because it involves a 15-day trip, but it is a trekker’s dream because the terrain changes from mountains to valleys to rivers to the Green Lake through the Zemu Glacier. The vistas seen when hiking this route in April are breathtaking.

If you’re planning a trip to South Sikkim, Namchi is a must-see. In April, the weather here varies from a delightful 13°C to a scorching 21°C, an 80-kilometer trip from Gangtok. As you approach the village, you are greeted with a massive monument of Guru Padmasambhava atop Samdruptse Hill. On a beautiful day in April, the view of Kanchendzonga from here, just a short walk from the main town, is spectacular. The Kitam Bird Sanctuary, located 20 kilometres from Namchi, is home to more than 200 bird species, including the Grey-crowned Prinia, Rufous-throated Wren-babbler, Yellow-vented Warbler, Wedge-billed Wren-babbler, and a variety of butterfly species.

Ravangla, a lovely mountain village about 26 kilometres from Namchi, is another popular tourist destination. The primary attraction in Buddha Park, also known as Tathagata Tsal, is another massive monument of Gautama Buddha. If you’re travelling in April, the walk up Maenam Hill from Ravangla is a must-do. The three-hour climb is well worth it for the panoramic vistas of Kalimpong, Darjeeling, and the Bengal plains, with the Kanchendzonga’s majestic peaks looming behind them. Every year, between the 8th and 12th of April, Ravangla organises the Rabong Discovered Festival. Traditional music, dances, handicrafts, and plenty of tasty local food are all part of the festival’s cultural spectacular.

If you’re planning a full Sikkim vacation, Pelling in West Sikkim must be on your itinerary. Pelling, which is around 113 kilometres from Gangtok and only 49 kilometres from Ravangla, is a good starting point for visiting some of Sikkim’s most notable sights. April brings the best weather to Pelling and the surrounding hills, with temperatures ranging from 13°C to 23°C. Rabdentse’s mediaeval remains are around 9 kilometres distant. In the 17th century, the Chogyal erected Rabdentse as Sikkim’s second capital. A delightful stroll through a dense forest of chestnut trees leads to the crumbling ruins of the old palace and monastery, which are now completely covered with moss.

April is unquestionably one of the greatest months to visit the Himalayan state of Sikkim, with its sunny days, agreeable temperature, and plenty of flowers.